Here are some pictures of Al Qasr. The Old Ottoman Islamic village dominates the town. Extreamly well preserved with dark lurking tunnels and allyways. Old bricks of mud which the rain can destroy. A little traditional town – Islamic, poor, hosptiable, quite, and very relaxing. 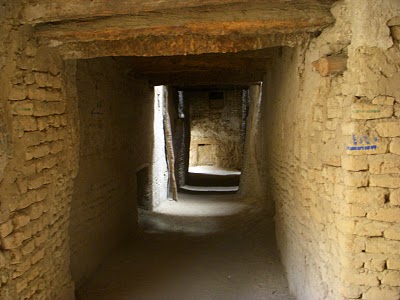 Al Qasr is a lazy town with a historic site. Within the site of the Old Ottoman Islamic mud brick town resides energy, an energy of the past. Silence, airy – the old mud bricks try to speak out. A feeling of abandonment, although some people still live within some of the rustic walls, a ghost town feeling is present. Creepy, loney, quite, stillness – the mind wonders what is behind those windows of blackness; a skelleton, a starving cat, an old man with deep ingrained wrinkels that seep into the bone, hunched over with a missing eye and rotted teeth? A lurking demon who lived long ago with the humans during the time the town was at its glory; attached and unable to leave, that poor lonely demon wails and crys for the past to return. The ghost town – a feeling of energy, a feeling of pesence when there isn’t any – a town abandon by people, a town of loneliness. Trying to get a minds view on how they lived shouldn’t be difficult. Bread baking in the oven, the smell strolling down the street; fire cooked chicken filling the streets, which the poor are tormented because of their hunger, creating an unbearable craving. The sound of the prayer call enters the ally-ways and echos. Children playing in the streets. A defence system created to defend , houses built with the consideration of the harsh, brutel summer heat. A hard life it was as is today in this same area of the world. This is Al Qasr, a place to visit during your travel of Egypt. Please meet my little translator. Every time I would go into this paticular part of town this little girl would come out of her house and hold my hand and walk with me. I decided to call here my translator. Anything I said, she would answer – Yes. This is My Muhammad on the left. On the right is Roger from France, these are the two people I basically hung out with for the two weeks I was staying there. Roger is staying a month in a half in Al Qasr.

Mr hospitality (Muhammad) is a wonderful nice guy. He serves up a great dinner and is just your basic nice comical guy. You can look up the Al Qasr hotel in the Lonely Planet Guide book. I couldn’t ask for a better deal.