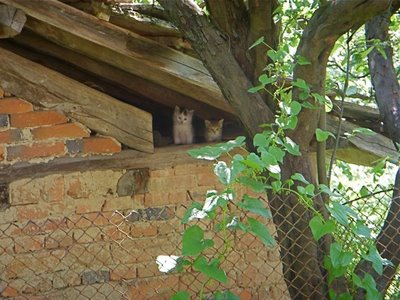 The one eyed cat that I feed is a mother of two cute little kittens in the above picture.

A subject I have meant to write about is in regards to the alternative health care industry, referring to massage, and any type of modality that works with the body, including energy work; however, I am not referring to Acupuncture within this ariticle. I refrain from seeking out massage or any other modality because the struggle to find someone who will remain within their scope of practice. A person that has been trained for massage, reflexology, or any other modality is only trained within that scope of modality. They are not trained to work with a person within the structure of the emotional reality of an individual. Studying over 600 hours of massage, trigger point release, and deep tissue, I am fully aware the potential problem of the practitioner by deluding themselves that they are a healer or therapist, which is derived from a low self-esteem.

The mother cat lounging on the safe side of the fence, her right eye is blind. 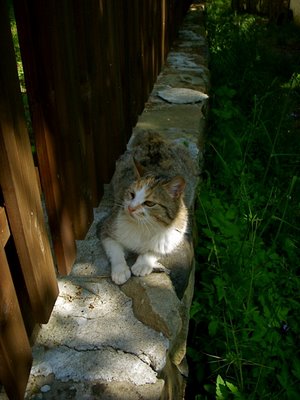 The terminology of any type of modality should be “practitioner” and not “therapist”, a major mistake of the alternative health care system. Once a practitioner of Massage, Chiropractor, Reiki, Reflexology, Rolfing, NET, EFT, or any other modality, perceives himself or herself as a “healer”, that person is severely deluded and most likely can be damaging to the inner self of the client. The powers of the darkness are subtle, cunning, and deceiving. The darkness strives to create a scenario that a person will believe related to a person’s past. The darkness dwells in the past that the ego quality of playing the victim attaches upon the person. The light remains in the moment and projects into the future, but without allowing fantasy, or expectations to dominate the perception of projection.

For some odd reason, petting her butt motivates her to eat the cat food, she does love home cooking. 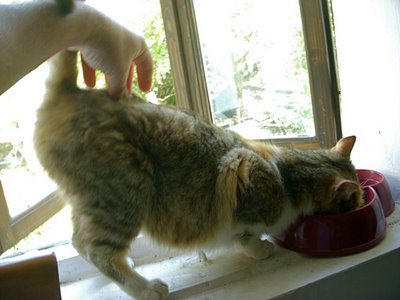 Any practitioner of alternative or traditional health care that attempts to delve into a person’s past, and traps them into a stage of self-pity and playing the victim, and the practitioner uses their low self-esteem that creates a damaging effect: That person is under the influence of the darkness. The darkness uses ego-driven qualities of feeling special and playing the victim by combining self-pity and disagreeable instances from childhood to fasten, and attach onto the congested emotional baggage of the individual. Henceforth, the strategy of the darkness is to trap the individual into a non-progressive cube of negative self-pity, loathing the past produces, animosity, and bitterness—the individual becomes positioned dogmatically into believing what the ego is dictating. The darkness thrives within the spectrum of this catch twenty-two.

A common site around the house, the cat is nice an relaxed on the other side of the fence. The reality is that everyone experienced, on some degree, disagreeable occurrences in the past. Everyone of humanity needs some sort of nurturing on some level within an area of life—each person is different, each person has different circumstances. The majority of humanity suffers from a lack of inner intimacy, even though they may be married and have children. The practitioner of a low self-esteem will not only draw out normal deficiencies, but also pursue negativity upon the client that creates a false sense of higher esteem upon the practitioner that is founded upon the egocentric hopelessness that results from separateness of the inner self. Consequently, the transferred energy from the practitioner to the client is damaging to the client’s inner self.

So a person might be asking, if a person experienced disagreeable circumstances in the past that is causing problems within their current life, what is the remedy? Any type of abusive or disagreeable emotional occurrences from the past created congested emotional baggage within the individual’s emotional reality. Emotional congestion causes passive, lethargic brain activity that produces an absent mindedness that creates a sense of lost and insecurity within the core of the individual; consequently, troubleshooting in regards to decision-making within the moment is handicapped. The only remedy is to release the congested emotional baggage; one method is through weeping, however, the darkness has brainwashed cultures in to believing that it is weak to cry. Understanding the context of a former disagreeable circumstance is not always necessary. However, the context of a past occurrence can produce awareness that may be positive for the individual. There are several methods that are available that can remove layers of old congested emotional baggage, however, it is crucial that the practitioner is healthy without any negative agenda toward the client.

If you sense the practitioner is involved within an addictive lifestyle, prone to jealousy, or envy, and dwells separate from their inner self that fabricates a low-self esteem, avoid this type of person. However, there are many good-hearted practitioners of alternative, and traditional health care. Knowing the person or visiting someone through a referral of a friend is the best choice. Randomly choosing can be risky. I personally avoid seeking massage work because it is difficult to find someone who will strictly focus on the scope of bodywork.