The three Presidents of Bosnia consist of one Bosnian Croatian that lives in Mostar, one Bosnian Muslim that lived in Sarajevo and one Bosnian Serb that lives in Banja Luka and they rotate every four months. Transporting from one entity to the other is unnoticeable except for a small sign on the road, but no checkpoints, the entire country uses the same currency—the Bosnian Mark, the car license plates are indistinguishable, same passports, and the country has a unified army. Within some predominately Serb areas the only difference you will notice is the Cyrillic alphabet used. 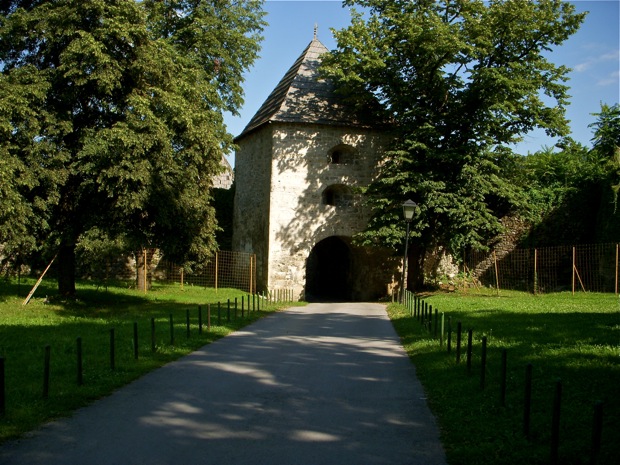 The Entrance to the Fortress of Banja Luka

The midsize city of Banja Luka, and second largest in BiH, is quite nice with a fortress that resides on the banks of the Vrbas river; the river within the area can provide white water rafting activities. In 1969 Banja Luka was devastated with a powerful earthquake. The architecture is modernly bland, but there is a nice walkway with many flamboyant girls. From observation this flamboyance of the Balkans is predominant in the Christian areas; it is comical viewing their crucifix that hangs down into their cleavage, this is a common view in Greece, too. The Two Entities of Bosnia

The Internet Woes in the Balkans:

I have three weeks until I rent the flat in Sarajevo. I might just run out of places to visit here in Bosnia because it is a small country and most homes/rooms do not have internet. Strangely, all the wireless networks are locked in the neighborhoods including businesses—it stems from non-education and fear. This is the case in Bulgaria including Greece and heading north. But in Greece there is a nationwide network in each town center and I got the password early-on, so no problem there.

So, first, the company sets up the service incorrectly for the homeowner. Instead of adding the IP address and DNS server numbers manually, they will set the PC to automatic. Setting it to automatic generates a router address even if there is no router referring through the ethernet cable, and it will appear as a “self-assigned IP address”, even some cafes are hooked up this way. Or, they have it set up through the router that the user needs to be log-in, which on wireless is impossible. The owner has no clue why this is the case, but I try to explain the cause but they are at a loss. If you end up on a ethernet cable and the Internet does not hook up automatically, then the username and password needs to be added. The Local Theater in Banja Luka

So get this, everyone is convinced that if their wireless network is not lock someone might hack into their computer? Give me a break, none of the computer owners is cognizant of their IP address, or the DNS. The percentage of people that can hack within these countries is an extremely low percentage next to none, and who would want to hack into a home computer anyway, to view their porn collection? I have not met anyone that comprehends the inner guts of their operating system, nor their wireless Internet settings. Most people are just programed with fear. Now, if the customer is using a limited service, then yes, it should be locked, but most are not limited. And on top of this, the consumer is not willing to call the service provider, they will just sit-on-it because programing from a young age prevents assertiveness, which is an old communistic quality. After doing some research here is a link to hacking wireless networks.

Take Note: Many passwords are 1234567890, I have log on to many networks in several countries by using the above “password”. I learned this way back in Lebanon.

Interesting enough, everyone thinks I am going on the Internet to view Facebook. Most people go on the Internet for Facebook, Skype and for Email within these countries, I have observed this continually. Some cafes that I couldn’t log-onto would offer the business computer and say “facebook”.

A Detour to Belgrade:

As I was saying that I have three weeks before the apartment availability in Sarajevo, so I am thinking of jotting over to Belgrade for a week. There are 15 buses from Banja Luka a day, a 7 hour trip. One reason is that when I depart from Sarajevo at the end of August I will be doing some city hopping up to Poland. I will take the overnight train from Sarajevo to Zagreb Croatia, visit a few days and another train to Budapest. After visiting Budapest, I will head to Bratislava in Slovakia, and then decide if I will travel Slovakia for awhile, or visit Vienna, and head to Poland from there; I will figure-out the details when I get to that region. So I would like to visit Belgrade because it was the capital of former Yugoslavia and I have some extra time, it will really round off my travels here in the Balkans.

As a long term traveler I am very decisive about the countries I want to explore longer term. I would like to spend more time in Hungary, but the winter will be creeping up quickly and I must visit Poland before I leave the region.

On the way back into Bosnia from Belgrade I can still visit a few towns on the way to Sarajevo and then of course visit the supposedly Greatest Tallest Pyramid in world that resides about 30 kilometers from Sarajevo. Oh, you haven’t heard of this Pyramid, well neither have I until now.

So I will be in Belgrade by the beginning of the week.

Previous post: Jajce and the Waterfalls, A Short History and the Weather Report.