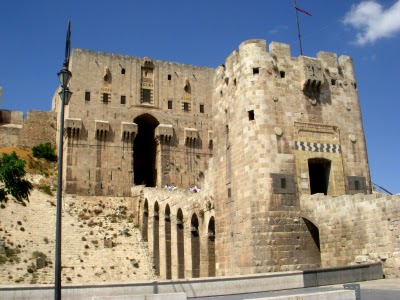 I arrived in Aleppo Friday evening by train. At the train station, I met a few guys that were attending the university in Lattakia, I ended up sitting with them, and we had some good conversations. The subject of politics was short, although, there are many subjects that we conversed about in depth. Lattakia is a nice place to visit; it didn’t have as strange as energy as Tartus. The young people hang out downtown decked out in fashionable dress, the coffee shops are packed on Thursday nights – men and women smoking the water pipe. They close the streets to cars in the little downtown area of Lattakia during the evenings of the weekend. 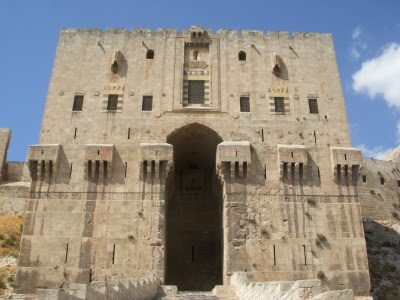 At any rate, I am now in conservative Aleppo; being the second biggest city is Syria – known for exceptional cuisine and its famous labyrinthine souq, Aleppo is a cross road the majority of travels will end up at. As a matter of fact, Aleppo, in addition, is one of the oldest continually inhabited cities, competing with Damascus dating back 8000 years. To boot, the Great Mosque here in Aleppo is only ten years younger than the Umayyad Mosque in Damascus. The couch-surfing situation is wonderful – only two blocks from the train station. The flat is of immense size; they gave me my own key so I can just come and go. I will be staying in Aleppo at least until Tuesday. At this point, I am leaning on heading to Deir ez-Zur, then Palmyra and then head to Hama. When I got my passport extended, they gave me until July 18th to travel Syria; they would have given me two to three months, no problem. Mary, who I will be house sitting for, contacted me and I will be heading to Beirut on the 22nd of this month, which gives me four more days for Syria. 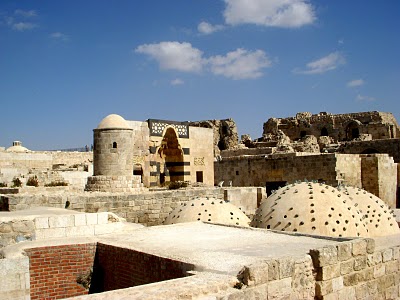 Something I have found intriguing is that in a more conservative area, the same questions arise. Are you married? Do you have children? What is your job? More liberal areas, such as on the coast, people did not ask such questions. I finely went to a Hammam, a Turkish bathhouse. They have several here in Aleppo and in Damascus. I must say, just like during the Ottoman era, the design of the bathhouse. The below picture is a restored bathhouse in the Citadel. The entry area of the Hammam I visited is a large room with a fountain in the middle. You cover with a towel and take off your clothes. Then I was lead into a small, all marble room, for a hot stem bath. From the stem bath, I was lead into a room such as in the below picture. In the marble bowl, there is running water that the person uses for a body scrub. After the body scrub, the person applies a very soft type of soap for a simple massage. During this time, I am laying on the marble floor flipping from one side to the other. After this process, I was lead into another room that a different person washes my hair and upper body with soap. After this relaxing procedure, I was lead out into the entry area; covered completely with towels in preparation for tea and water. Some Hammams are men only or women only. Most Hammams serve women during the day and men at night. They keep the client covered at all times; they make it very comfortable for the public.

Unexpectedly, today I ran into the Polish couple, from Warsaw, next to the Citadel that I met in Lattakia. We had a cool beverage together – they are very nice people, and Warsaw is on the list for 2009. The Citadel, in the pictures posted, is an impressive defense system. The mound is natural, not artificial, which dominates the city. The Citadel was a worship center during the times of the 10th century BCE and beyond. The Citadel served as a powerful base during the crusader era. Viewing Aleppo from the Citadel, a person will observe a multitude of minarets rising from the ground. It is said that Aleppo is the third city of Islam. The amount of women that cover here in Aleppo is greater than the women that go with out the head covering, a vast difference than the coast.