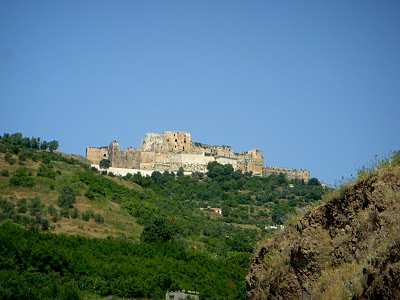 Crac Des Chevaliers – by far the most impressive castle from the Crusader and Mamluk era, although first constructed back in 1031 by the Emir of Homs – the crusaders fortified the castle extensively. T.E Lawrence simply called it the “the finest castle in the world”. The castle is situated off the main road between Tartus and Homs, a roadway that has been a major trade route in history. This castle is the best preserved of all the castles that have been visited, and there is a good chance that this castle will be the best of all the castles that will be visited of the crusader era. At the time the Mumluk armies came to besiege the castle, the crusaders had enough supplies to hold out for five years, although they decided to depart the castle peacefully and today the castle has been preserved just about in a complete state. The defense system of the castle is something to behold. The outer defense walls circle the inner fortress. There is a moat on the side of the Wardens Tower, the south side. The south side was the weakest and most vulnerable to attack.

There are staircases a person can climb to inner chambers, and to the rooftops, to get spectacular views of the surrounding area. Indeed, Crac Des Chevaliers is not to be missed when traveling Syria. Shobak castle in Jordan is nothing compared to the castle at Karak. The Castle in Karak in Jordan is well worth the visit; Crac, certainly, can be awarded elite status. This area can be changeling to arrive at. If the taxi drivers were honest, the travel wouldn’t be as annoying. Going to the Castle is easier then getting back to Tartus. A person can also visit the castle from Homs. Nevertheless, traveling from city to city is easy and relaxing riding on big air-conditioned Pullman buses.

Observing the dishonesty of people is always interesting. Observing peoples desires and jealousy in life is even more interesting. A person that refuses to acknowledge spirituality – within themselves – and pursue the ways of the light; this person will make themselves vulnerable to the negative desires of the world and darkness. Loneliness, boredom, jealousy, envy, harmful gossip, and ego driven self-centeredness, these behaviors and emotions – repeatedly surface among the populace of every type of nationality. The emotional baggage people carry around, due to cultural upbringing, religious convection, and media indoctrinated deception, the masses of people (not everyone) lack the skill to troubleshoot. Not only passive activity and boredom has its grip among the populace, but also, separateness from oneself which fear plays a key-roll.

Without question – the darkness will continually battle to entrap a person. If each person would understand the depths and the truth of Karma – people would not act foolishly when fabricating decisions. Karma dictates life, if a person thinks that they can hurt another person, emotionally, spiritually, physically, or lies and cheats – that person is severely deluded. Observing how the ego plays its game with each nationality, race, ethnic group, tribe of people is very interesting. There is a common – play of the game – with three predominate themes, although, each culture relates differently to the game along with a common behavior.