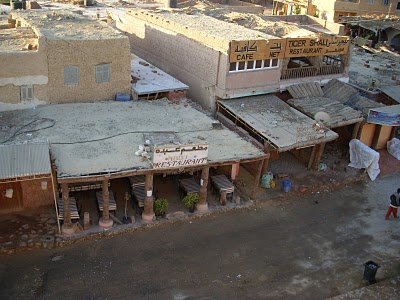 Great news, I was just offered to rent a house for a week. It is out at Dakrur Mountain. Small little village with a couple of resort hotels in the area. The person brought me out on a motorbike to look at it. Three bedrooms, nice bathroom, full kitchen, roof top lounging area, inside sitting area, all for 250LE basically under $50 for seven days. I am going to head to the house on Saturday. I will rent a bike for all week for 70LE and this place is close to the Cleopatra spring which is my main hang out place. 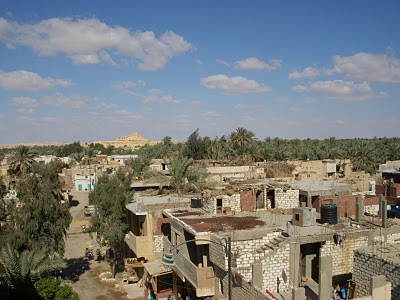 This house is the middle of old mud houses that are not being used. Nice quite, solitude time it will be. Just what I am looking for. This town is amazing. I have been here for six days and I run into people that I have meet on the streets everyday. Everyone is ultra friendly plus I am running to great connections quickly.
Yesterday I was out at the Cleopatra spring and I ran into a woman from Chicago and her husband from Sicily, they have been living here since May doing a restoration project on the Shali Fort. They said to drop by the work site for breakfast some morning. I also met the Sheik of Swia, the mayor himself who owns the Abdu restaurant. Basically if anyone whats to do business in the oasis you have to go through him. 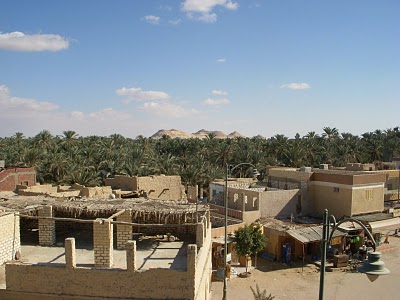 The Dakrur Mountain where I will be renting the house is in the background.

A major cultural side point by the way. Your not going to believe it. All the donkeys are male. There is not a single female donkey on the street. There are a couple of reasons. The men of Siwa may be tempted to mount one, mounting as in sex. The Women of Swia get jealous because here is the female donkey walking around without having to be covered. Also, just think how crazy all the male donkeys would become if you would bring a female donkey into the market square. Could you just imagine the sight, it would be like if a girl swims in the Cleopatra bath in a bikini, all the men of Siwa get on their cell phones and head on out in the truck loads. Kind of funny when you think of it, but it has happened. I have kept wondering why some of the donkeys are always uptight, honking all the time. Now I know why. Because of the deep rooted culture the men are a little strange when it comes to sexuality. A deep rooted problem. Good thing they leave the female donkeys outside of town for the sake of the men of Siwa.

The guy that runs the hotel is single, I was asking how would he go about meeting a girl and getting married. Basically, he would let his mom know he wants a wife. His mom would arrange for him to meet a woman in public through families. If he is interested in the woman, then, through the families it would be arranged, although the sad note is I don’t think the women have a choice in the matter. Keep in mind it’s their culture, and it is an old culture. Change, if it would take place, would be very slow and difficult. Like I said many people in the west that has never traveled, and are stuck on their extreme issues of conflict don’t have any idea of the depths of another cultural if they haven’t traveled. Each cultural has it’s problems, ups and downs, negative and positive, including America.

I am in the process of looking for a mosquito net to sleep under. I have to figure out this problem regarding the mosquitoes. The lady in the tent the other night out at the desert sleeps mummy style, although I would have a hard time breathing, a net would be better, we will see what I can find within town. For now I am using OFF and keeping my arms under the blankets. Until next time.