Here’s a few pictures of the Mosque I mentioned before that dates back to the eighth century. The atmosphere of a Mosque is kind of relaxing. There isn’t any Idolatry within the building, except for a few Mosques, which has a shrine of a tomb, regarding someone from Islamic history. 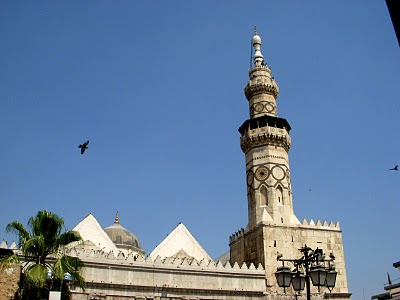 I will be heading out of Damascus on Saturday to Tartus. I could stay in Damascus longer, but it is time to head out and travel the country. Once I get to Aleppo I have a couch-surfing situation set up, he lives right in the town center. Now there was a certain disciple at Damascus named Ananias. The Lord said to him in a vision, “Ananias!” He said, “Look, it’s me, Lord. “ The Lord said to him, “Arise, and go to the street which is called Straight, and inquire in the house of Judas for one named Saul, a man of Tarsus. The two in one flat I have been staying is a progressive, changeable flat. The girl from Spain went back home, although missed her first flight. Then, a girl from Bulgaria, although fluent in English, who attends the University of Southern California, moved in. A guy from Australia also moved in, and of course, Amy from New Zealand is living in the flat, all three of them are in school learning Arabic here in Damascus. We all hang out at the café in the neighborhood in the evenings with a bunch of other friends we have met. 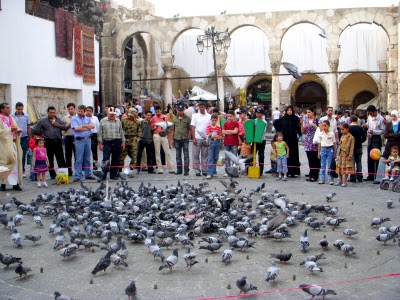 Life is interesting: you never know whom you might meet in the moment. Each person has different interests, different energy, different perceptions in life, and a different belief system. Some people are more compatible then others; some people are a world apart – having nothing in common. Some people can energize the other; one person can bore the other into the ground. One person can make the other laugh, feel gay and joyful, another type of person can irritate and annoy the other until they start coming out of their skin. There is good energy along with rotten energy among the forces of the light and darkness. The darkness is empty, lonely, depressed, always wanting more – never experiencing true deep satisfaction in life. The light is clam, relaxed, satisfied, happy, and content. Each person experiences different levels of darkness and the light; confidently, each person should strive to conquer the darkness with the light. This is inside of a restaurant that Amy and I had dinner at the other night in the old city. Most place have an open air courtyard with a water fountain in the middle of the building.