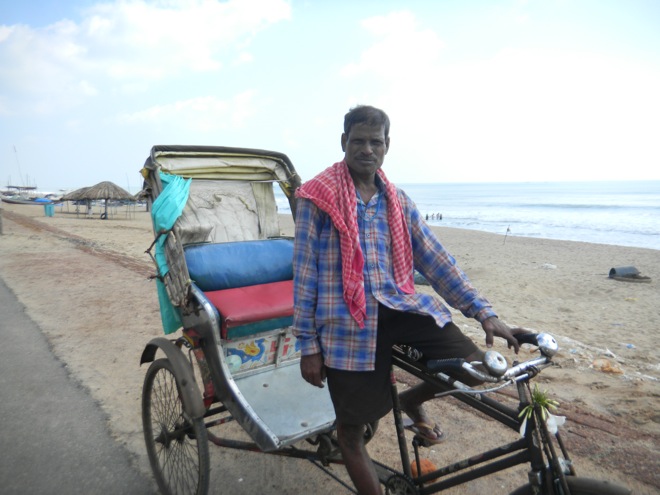 Around certain parts of India there human powered “Rickshaws”. These guys are a slight head-rush. In Puri there are all pedal-cycle style. In Calcutta there are many rickshaws but no pedal-cycle, they human power the cart with their legs. These guys are the lower class of society and are more than willing to rip you off. Yet, they are strong, I never see them huffing and puffing powering the cart around, even with two fat people on the rickshaw. Most will sleep in their rickshaw, but many are from other villages and will come to Puri or Calcutta to work the busy season during the winter and go back home for the summer.

This guy carted me around in Puri. I also tested him with a generous tip, yet he failed to keep his word to show the next day to cart me to this fishing village in the area of Puri. But since I get my days wrong he showed his face when I supposedly left Puri, but I was still there and he brought me to the village and showed up to cart me to the train station for my departure.

I’ve been testing out the mentality among the poor and I can say they only think money, but within a stupid level. Trouble-shooting does not exist. There is a wide gap between the educated well-to-do and the illiterate. The educated person always will visit within a normal conversation and never ask for a provision.

Next post: The Sun Temple at Konark—Eastern Coast India