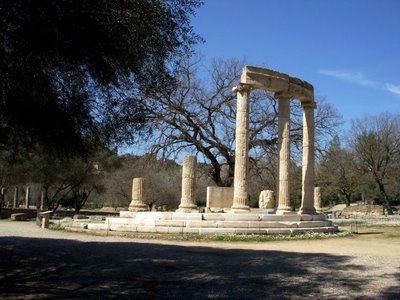 In Ancient times, the Olympics were the most prominent and distinguished sporting event in the world. Countries and states would shortly terminate their conflicts, disagreements, and battle against each other in the sporting arena. The games lasted one thousand years until Theodosius the First abolished the games in 394 CE. The first official Olympic games began in 776 BCE. The games renewed in action every four years in 1896; today the winter and summer games rotate every two years. In 2004, the games returned to the Olympia where the Olympic flame was lit and carried to the stadium in Athens. 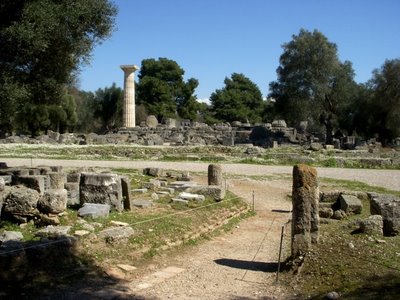 The games occurred at the first full moon of August in the honor of Zeus. The temple of Zeus at Olympia housed the statue of Zeus, which was one of the seven wonders of the Ancient World. This is the forth location that existed one of the wonders that I have visited. The gathering of the games lasted five days, and only Greek males were to compete, after a while Romans participated in the games, but only males, women were banded from participating and as spectators. In addition to the games, analytics and executives gathered to attain transactions and to intellectualize. Ancient Olympia may not “wow” the long-term traveler; even so, the historical significance combined with the energy of competition provides a charming character. I bargained for a room in a nice hotel here in Olympia. The regular rate for the room is 45 Euro, and breakfast is 14 Euro. I got a comfortable room with breakfast for 35 Euro with free wireless Internet. The town of Olympia is solely tourism, however at this time of year everything is slow. One large group of Canadian high school students was at the site; they are on a ten-day tour of Greece and Italy. Strangely enough, I asked if they were going to Delphi, and they said No—perplexing. 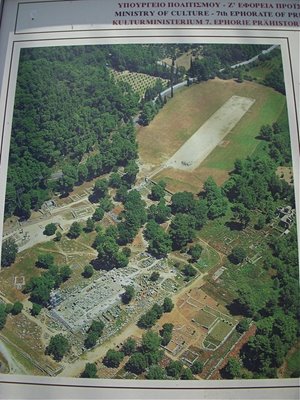 Here is a model of what Olympia looked like during the BCE era. This picture below is the view from the stadium area side of Olympia looking toward the temple of Zeus, notice the tunnel entering the stadium and the natural hills of the stadium. The stadium could hold 4500 spectators. Tomorrow I am heading to Kalamata to couch-surf for three nights.