I decided to stay in Athens one more day. I have been overly tired and my digestion is slightly off balance. Also, my muscles from walking up the many stairs in Nafplio and Mystras are sore. So, I will take a day of rest on this rainy, gloomy day in Athens and tomorrow I will head to Delphi. Using a tennis ball on the wall to massage my gluteus and piriformis muscles works well.

The Temple of Poseidon. I moved from the six bed dorm to a four bed dorm yesterday. The four bed dorm might lack electrical outlets, but the room has better energy, plus, for now I am the only person in the room.

The Acropolis of Athens. The month of March worked out great by only staying at the organic farm a week in a half, and then traveling Peloponnese. Greece is a beautiful country, and the culture is much more opened than Turkey because of the breakdown of the religion. Around the globe, small towns are similar; people are bored, they gossip, the desire to know everyone’s business is predominate. Even so, the energy here is Greece is considerably relaxed than in many places in Turkey. Greece and Turkey are similar in many ways because of the influence of the Ottomans, however, there are stark differences between the two countries.

The area of the Temple of Poseidon. The blend among the sexes changes the energy of a region, including the acceptance of alcohol. It is fascinating to have observed the negative results of the separation of the sexes in certain regions. Indeed, karmic bonds are attached to any region, culture, tribe, and nation that suppresses freedom of expression, and that subdues nature. The populace of the country suffers on different levels due to the ideology that is taught. Nowadays, humanity is distant of understanding our true nature because of the deranged perception that the media teaches. The result is a locked Chakra system, and congested emotional baggage.

The below picture is the Olympic Stadium used in 1896 when they renewed the games. In 2004 the Stadium was restored and used for a few events, including the finish location of the marathons. 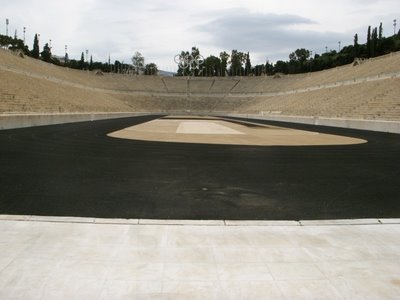 I find it remarkable the urge people have to go out at night and party—the younger generation especially. The level of discontent is unusual; emotions unchecked is what creates the motivation, which predominantly, loneliness and boredom is the prime influence. A continual detail I observe of the majority is door slamming, and not having any sense of consideration of their fellow citizen. My plans are set until at least June, I will be visiting Delphi, Volos, and Meteora here in Greece and then head to Bulgaria. I will visit Sophia of a few days before I head to the house-sitting situation. If I have time I might visit one town on the way in Bulgaria.