Palmyra, once a major Roman city, built in an oasis that was a major staging post for caravans crossing the Syrian Desert; texts were found in Mari that dates back to the second millennium BCE. Additionally, Palmyra was an important link for the Silk Road that originated in China. The ruins that remain are primarily from the Roman era, except for the Arab Castle that dominates the town. Emperor Hadrian visited Palmyra in 130 CE and declared it a free city. Palmyra became a Roman colony in 212 CE during the reign of Caracalla; from this time, Palmyra prospered and became the bride of the desert. 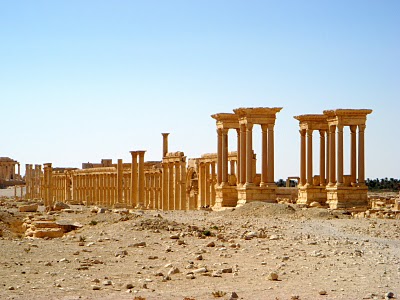 In time, internal struggles blossomed and after an assassination, Zenobia, who claimed to be from the line of Cleopatra, became Queen. Zenobia was suspected in the assassination of her husband. Zenobia rebelled against Rome and lead to Palmyra’s gradual decline. 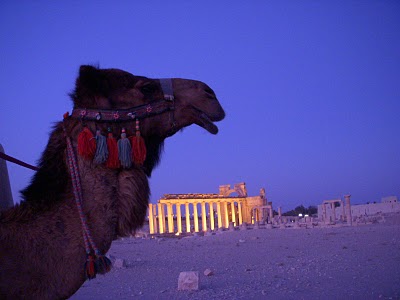 Zenobia did lead her army in a successful offensive against the garrison at Bosra. Furthermore, invaded Egypt; thus claimed independence for Syria, Palestine, and a part of Egypt. The Emperor Auelian, who did want to negotiate, could not accept the rebellion and tolerate the ambitious show of open subversion. Attacking Palmyra, Zenobia was obstinate and escaped by camel. Even though, her escape was brief – the Romans captured Zenobia and trotted her off to Rome in 272 CE. As Aurelian’s prize and trophy, she was paraded through the streets of Rome in gold chains. Palmyra met its destiny with an earthquake in 1089 CE. The first digs began in 1751 and extensively continued after world war two. As might be expected, the digging has been achieved by the west, just like everywhere else. The beautiful castle above the ruins was first built by the Arabs in the 13th century and was fortified in the 17th century. The castle is an incredible defense system that was built with a moat surrounding the fortress, which today, crossing the bridge is necessary to enter the fortress. Perched high on a hill, the workmanship is a wonder in itself. Besieging this castle would have been a difficult feat for any army. Starving the people to death, and obviously, cutting off the water supply would have been a remedy to victory against this castle. There was one other hilltop behind the castle from the location of the town; catapulting from that hill would have been the answer. Nonetheless, this Arab castle was never attacked, and stands in its original state. There are the ruins of three different temples, the theater, the palace, the colonnade street, bathhouses that was built by Diocletian, the beautiful – dominant tetrapylon, a funerary temple, and there is a valley of tombs. Indubitably, Palmyra is the supreme tourist site in Syria – a splendid area to explore, which can be easily accomplished on foot. Consequently, a town with the worst energy that reminded me of Egypt; a town that creates a hassle; a town playing the victim and is deeply affected from the tourist dollar – fierce competition that fosters resentment and anger is a clear symptom; a type of energy that I sensed when I was leaving Deir ez-Zur – a two night stay is adequate for the long term traveler in Palmyra.