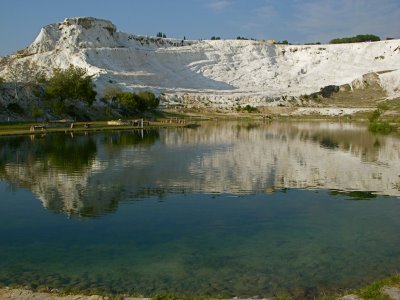 Pumukkale is well known for its brightly white calcium formations that are call the Travertine pools. Pumukkale means “Cotton Castle”, which is proper, the white hill viewed from a distance is unique. Tourism ruined the pools from the 1980’s and 90’s and now the Travertine pools are empty, many people are disappointed visiting the site. Although, I did fined walking up the white slab of calcium quite interesting. My tender bare feet loved the pain, a natural treatment of reflexology. At the top of the white hill of calcium the grand city of Hierapoils existed. A major Roman city that was built to take advantage of the natural flow of the thermal waters, Hierapoils was founded around 190 BCE by King Eumenes II of Pergamum. 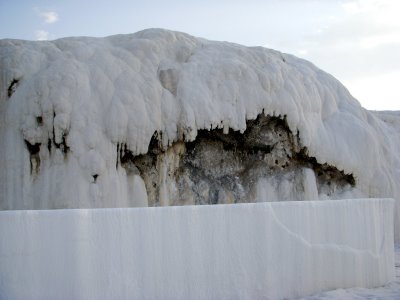 Hierapoils was a center to cure peoples aliments, naturally the water produced the idea, such as many places around the Middle East. Humanity is always seeking a cure of aliments, such as today in the world, many people have a focused desire to be cured from any current aliment. The Roman theater is the most spectacular site that was situated just above the Temple of Apollo. As in Delphi, Greece, the temple of Apollo supposably had an oracle tended by priests of the temple. The city plan of Hierapoils. The museum is worth the extra cost on the top of the Calcium hill slab.