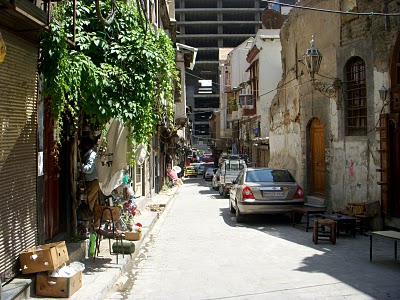 Several developments have happened lately. First, I have moved into my peaceful, quite, comfortable room with a kitchen, hot water, and a washing machine. Here in Damascus it is very easy to find a room in a flat. I was offered a room in the old city from a guy who invited me into his house to have tea and play music, although the cost was to high for the room. The going price for a room is around 10,000 Syrian Pounds for a month. When you get into town just start asking around for a flat, you should be able to find one quickly. What happened is that I went to buy a sim-card for my cell phone, the store owner asked how much am I paying for the hotel, he said I was paying way to much and showed me the room. The room costs half the price of the hotel. He is a very kind, comical guy. Everything is really coming together for this summer, I am so very thankful finding a situation that provides my own space once awhile. The hotel I was at for two nights had some strange energy. I did have a hard time contacting the couch-surfing guy. We will be meeting tonight for a drink. There is a possible chance that I might couch-surf when I get back to Damascus before I go to Lebanon. Lebanon might have sorted out there problems, according to the talks that went on in Qatar; hopefully, their arrangement will have a lasting effect. Damascus is an incredible city, a total surprise from a perception that the corrupted western media continually portrays into the public mind. In comparison, Damascus is leaning toward western ways and styles more than Cairo or Amman. The women (not all) dress to be noticed; I can’t believe it – tight jeans, low-cut shirts. Furthermore, couples show much more romantic expression in public; Jordan and Egypt are much more conservative than Damascus. The percentage of women that dress without the headscarf is much higher here in Damascus then Cairo and Amman. Damascus does have a couple of nightclubs in town, along with cafes that play live music some evenings. Just from my small amount of time here, so far, Damascus offers more to do than Amman and Cairo, although Cairo does have a rare personality that can draw a person in. 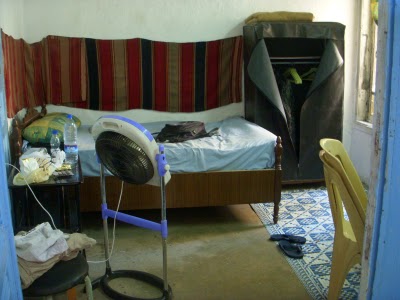 I cannot help from thinking back in Capitola, one of my neighbors and I were talking one night; he expressed how dangerous Syria must be, and that he wouldn’t feel safe walking the streets in Damascus. What a complete joke. I have been walking everywhere at night, and guess what? Damascus is safe as can be. People here in Damascus are very polite, friendly, generous people. Just because Syria hasn’t accepted Israel, the media – which the Zionists have control over – absolutely, brainwash the public with lies. The labeling that G.W.B. coined years ago is not even in the ballpark. When I go without watching any news for a couple of months, then I watch the BBC or CNN, politically speaking, their all messed up. Your average person is far removed from the rubbish the world governments are causing. Consequently, the average public is affected from the behaviors of the politicians. Do not forget, this whole world is under the power of the wicked ones of the darkness. It is foolishness to put your hope, or any faith, in this world.