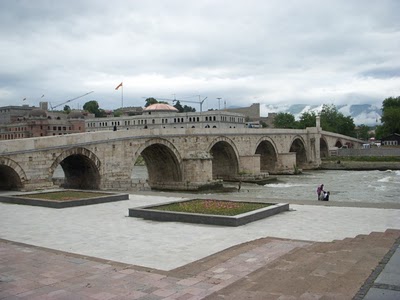 The river below the Old Stone Bridge Divides the City of Skopje.

I arrived in Macedonia for a rainy and cold introduction. Skopje feels much smaller than Sofia and there are no trams; Sofia could be considered the tram-city. The border of Bulgaria and Macedonia was freezing being so high in the mountains.

Rapping everything up worked out perfect in Bulgaria and it was best not to travel with a car. It cost 33 Bulgarian lev for the bus to Skopje and driving would have been 90 lev, at least. The Christian Side of Skopje with their Idolatrous Cross on top of the mountain.

Macedonia feels much more religious than Bulgaria, yet the christian side of the culture is similar. Bulgaria is just very easy going according to religion than Turkey, Greece, and here in Macedonia, a least from the outward appearance. Skopje is divided between the river, the south side is Christian and the north side is Muslim. The Muslim area is the old city, the tourist bazaar, the castle, and a few museums. The Christian side of the city is the new city center with a couple of malls. I prefer the Muslim side. The Muslim culture is predominately from the Ottoman empire. Everyplace I have visited from Egypt to Turkey and now here in Skopje the Muslim culture according to the outward appearance is similar. I prefer the Muslim cultural because it is more earthly and cultural; the Muslims here in Skopje are mostly Macedonian/Albanian.

One of the most controversial issues is the name Macedonia. The constitutional name of the country is the Republic of Macedonia and it is usually called simply Macedonia, despite the disambiguation concerns of the neighboring Greeks in the Greek province Macedonia and the official provisional name the country has under UN. 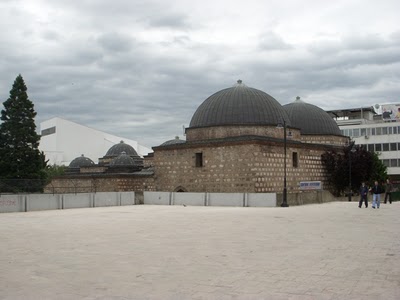 If you bring Bulgarian Lev into the country the banks on the Christian side will not exchange them, but the Muslim side will.

I will be visiting a few towns south and then head to Albania. Most likely, Macedonia will be a two week visit.