The Castle at Musyaf is a castle in Syria that might not get much attention in the guidebooks or that you might hear much about. Nevertheless, this castle dominates the town of Musyaf and once a traveler takes the jaunt out to Musyaf, you will not be sorry you took the time to view this outstanding castle. The crusaders captured the castle in 1103, although the crusaders were deficient in soldiers to garrison the castle. In 1140, the mysterious Ismaili Shiite sect, known as the Assassins, occupied the castle at Musyaf. The Ismili and the Syrian ruling Sunni Ayyubid dynasty waged guerrilla warfare, which the Ismili assassinated several Sunni leaders in 1175 and 1176. The Sunni warlord decided to lay siege on the stronghold at Musyaf, even so, Saladin called off the attack, and some sort of agreement was arranged. The reason for this strange abandonment of the attack was that in the mist of Saladin’s camp, surrounded by Saladin’s guards, Saladin woke up from his sleep and saw a figure of a man slip out of his tent; there was a dagger and note at the foot of his bed – a warning from the leader of the assassins. 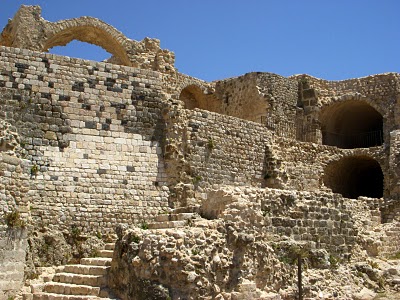 Not until a 100 years later, the Mamluk Sultan, Beybars, drove the Ismilis out of the castle stronghold. According to the legend, the assassins smoked hashish before they engineered their murderous adventures. The Europeans knew the assassins’ leader Sinan, as the “Old man of the Mountain”. The Muslims and Crusaders in the surrounding area came to fear and respect the Ismili Assassins that took their residence in the castle at Musyaf. 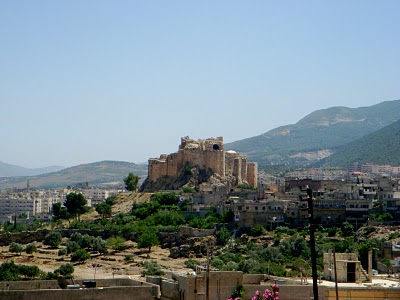 Musyaf is 40 kilometers east from Hama, an easy half-day trip that is worthwhile. As expected, another castle made from expertise workmanship. The extensive network of castles that existed during the Crusader and Mamluk Era is a wonderment in itself. Touring these castles has been exhilarating as touring the Temples of Egypt. The Roman cities have been a sure joy to explore, too.