The Great Temple of Ramses the Second. They don’t call this temple great for no reason. The Great Temple of Ramses the Second is the best of the best. The last temple on my tour of the temples of Egypt, although not even coming close to being the least. 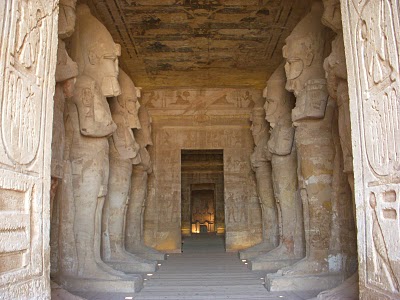 Carved out of the mountain on the west bank of the Nile (now Nasser lake) the colossal statues of Ramses II rise out of the desert and sit at a stunning 20 meters high. Majestically staring out across the desert on to lake Nasser as if time is just passing by – life like with strong energy; pulling at the human eyes – trying to draw him in. Certainly some strong lower entities are attached to these statues, this has been the case at all of the temples – long story. The Great hypostyle hall is of eight statues of Ramses with an offering hall beyond and the innermost chamber which are of the four gods, Amun, Ptah, Ra-Horakhty, and of course Ramses himself. I was the only one touring the temple, due to the fact I went after the crowds were there. All the tours leave at 3:30am and tour the temple around 8am then leave. 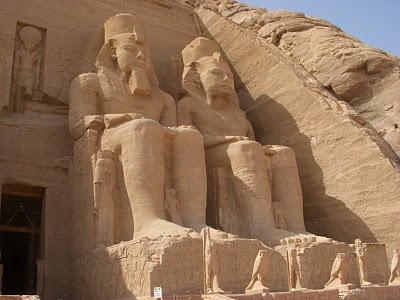 Within the same area was is another temple which was dedicated to Hathor, also cut out of the smaller mountain for Queen Nefertari – Ramses wife. I will be posting pictures of this temple at a later time. Quick update: I have a plan of travel for the rest of Egypt. First, I am heading out tomorrow for a five night, six day felucca trip, up to Edfu and back to Aswan. From Aswan I am going to just take the train to Cairo. I will most likely be in Cairo for three days or so. I might just skip seeing the Tel Al Amarna area, due to the fact it is difficult to get there and I am kind of tired of Upper Egypt. From Cairo I am going to head to Port Said on the Suez canal for a few days which is on the Mediterranean sea. I will also visit the towns of Ismallia and Suez on the canal. There are several beaches in this area. These three towns were built as colonial creations with a European influence as the canal grew. From Suez I will be heading to Dahab and Mount Sinai. The last town I will be visiting will be Nuweiba which is the place to catch the ferry to Jordan. I am planning to enter Jordan in May. Upper Egypt is an amazing place with some of the oldest temples and tombs in the world. Consequently, Upper Egypt is draining, tiring, a place which can get a person’s goat. Nevertheless, Upper Egypt is safe, all the Upper Egyptians want is your money; nothing more – nothing less.

Please Note: I just added about 200 pictures to Shutterfly. Mostly of Al Qasr and of the East Bank of Luxor.