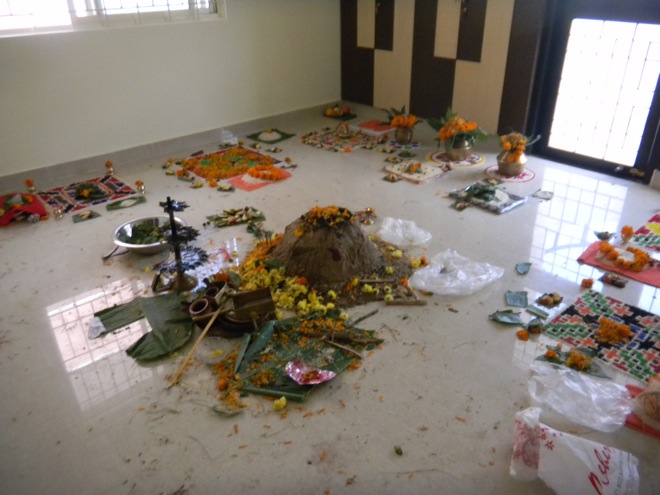 During the home-stay in Hyderabad I was had the opportunity to observe two different housewarming parties or “Puja”, Pūjā alternatively written as Pooja, means reverence or worship. Puja is any Hindu ceremonial, from a simple ritual in the home to an elaborate public festival, in which an image or other symbol of the god is worshipped. Its components vary from sect to sect and place to place but the puja is governed, at least theoretically, by rules in the shastras and other sacred texts and has probably changed little over the years.

A Puja for the new home is to remove any negative energies or spirits, and invite the good gods/spirits into the house. The Hindu Culture takes the new home seriously and the prime concern is getting off to a positive beginning for the new couple or family in their new home. The above picture is after the ritual ceremony. The Puja can be a lengthly process—after everyone gathers for dinner. 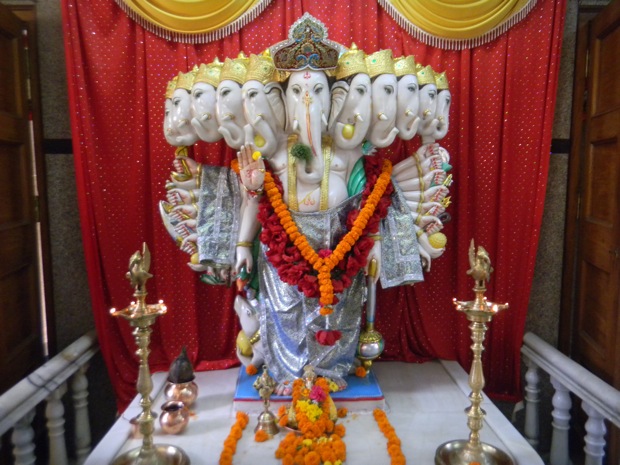 Ganesha The Hindu God of Success

Most all homes and many entrances of buildings will have the idol of Ganesha who represents the Hindu God of Success. The son of Shiva and Parvati, Ganesha has an elephantine countenance with a curved trunk and big ears, and a huge pot-bellied body of a human being. He is the Lord of success and destroyer of evils and obstacles. He is also worshipped as the god of education, knowledge, wisdom and wealth. In fact, Ganesha is one of the five prime Hindu deities (Brahma, Vishnu, Shiva and Durga being the other four) whose idolatry is glorified as the panchayatana puja.

The two Pujas were very different because the two families were from different regions of India, but similar within small aspects. Cultures differ from state to state and with different religious beliefs. The most important aspect from my observation is that the hindu families desire a positive start to their new home.

I was able to view both Puja styles within two different homes, but did not stay the entire length. The dinner gathering was very nice and I met a lot of people that lives in the high-rise complex.