This is a long post consisting of the last four days and the consecutive events up to today at the organic farm.

This portion was written March 3

I arrived on the farm on Wednesday afternoon; I did take the train, which is longer than the bus, although, the coastal ride is spectacular. The Northern coast of Peloponnese is dwarfed by tall mountains that overlook the Corinthian Gulf, and on the other side of the Gulf, the mainland, also, consists of white capped mountains gazing onto the Northern coast of Peloponnese of Greece. 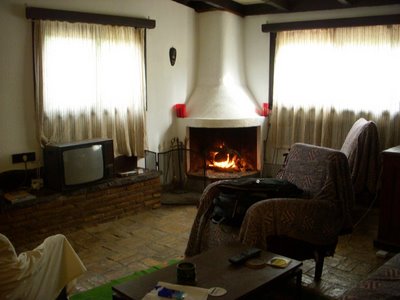 Mariejeanne, the widowed non-Greek owner of the farm, picked me up from train station, and she explained that I would be staying at the cottage in the area of Alissos, Achaia away from the main house to shred the olive branches and complete some grass cutting.

I have the whole cottage to myself with a wonderful fireplace, and storage stocked with wood. Mariejeanne and her sister brought me home cooked food each day. The difference between this situation and the farm in Israel is that the farm in Israel was a business trying to make a profit; this situation is based on a hobby, although the olive oil that is produced does go onto the market. There are olive and citrus trees surround the cottage, and only two blocks from the Mediterranean/Ionian Sea. 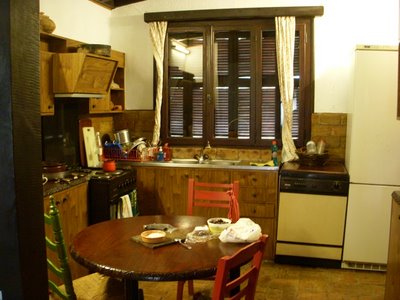 There was no Internet at the cottage, but today Mariejeanne brought me up to the main house in Patra, which has Internet. It looks like we will be planting some vegetables and doing some little projects.

The large sense space and infrastructure of America flabbergasts me; this little cottage with its shudder windows that can open on a sunny day, and close on those cold rainy days is wonderful. The rock placed floor and corner fireplace is a charm. A small, cozy, charming living space that consists of quality outweighs quantity according to my perception.

Why some travelers avoid an interest in spending some time on an organic farm is beyond my intellect, at least from all the blogs I read and browse? The right situation can be a wonderful break from being on the move, including restaurant food. Yet, many travelers are on the move in a fast fashion. From personal introspection, I am convinced they are running from the context of boredom that can create from traveling, although not enough time seems to be always an issue.

On the grounds of the small orchard, an Albania guy lives in the shed, an honest hearted person that I discerned from within, although the external circumstances can cause the opposite. The first night we met (although he does not speak any English) he offered me two eggs. The dinner I had in the house of potatoes and a meat pie was enough for two people so I offered him dinner, and we ate in his shed. I don’t think he eats meat very often, because what I served he immensely enjoyed. He did offer cold homemade white wine, which was very good. He showed me his family, his wife, a son at age twelve, and a daughter at age eight. There is no work in Albania—he is in Greece trying to make some money to support his family. 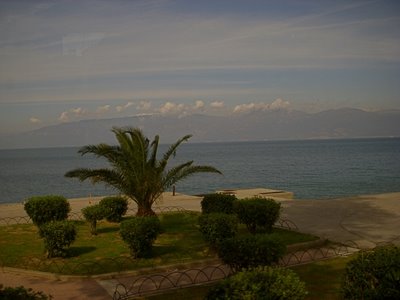 So what is up with Albania? Why is the country so poor? I liken the situation to the United States and Mexico. Multitudes of Albanians here in Greece trying to make money, including people from many different poor nations; although, the Greeks don’t like the Albanians, nor does anyone else, for some odd reason. Because of the break down in Yugoslavia, thousands immigrated to Albania where there is no work, thus, thousands ended up in Greece. As I travel and spend time in the region, I will figure out the truth behind the dynamics of the countries in the area of the Balkans.

Today I just found out that the Albanian guy has been living here in the shed for fifteen years. He will go back and visit his wife and kids during the holidays. Although, the common thought of the family is that he cannot be trusted, he spends all his money irresponsibly. To me he seems like a pleasant guy, but people can conceal their behaviors. Many nations of peoples around have the reputation of acting untrusting. Indeed, reputations, and stigma are attached because of the entrainment of the cultural entity that produce peculiar behavior among the ignorant. Poverty, integrated with victimization is a strange and potent combination. The victimization produces a feeling of entitlement that yearns dreadfully for more, however, there are people that are just slackers, irresponsible, expecting handouts without willing to work. The world has created a strange combination between the poor and rich; the western imperialism has tactically created such problems.

I hope this family, who are non Greek, are mellow. My first impression is of coldness, I am not too sure if they have hosted formally. This is not an absolute generality, although many British people I have met can be timid and distant—a result of western imperialism.

Today the sister of the owner came out, and we went to buy the shredder for the olive branches, which will be dropped off tomorrow. Today is rainy, so no work and they are OK with the situation. She sensed her sister’s coldness and attempted reassure that she was just having a bad day because of her stressful day job. At any rate, when there is strange emotion occurring, I will choose patience and will manifest a positive demeanor. Today the sister (Anne) was very friendly, she brought me some more food including sausage. The time at the cottage is wonderful, cooking up a fire each day. I am getting much offline computer work accomplished.

If everything works out well for the month I might offer to return for the harvest next November, it would work out well before I head to Italy for the winter. There is ferry service from Patra to Italy.

Today I arrived at the main house, I do have my own small flat, but I would rather be out at the cottage. It’s somewhat weird; I am dealing with the sister mostly, although I have not really done any work. I did move some olive branches, but they had to buy the shredder that was dropped off today, but needs assembling, and the weed whacker needs fixing. Here at the main house they have nothing set up, it seems like they do not know how to pursue the situation. Since I have arrived I have been mostly hanging out, but they don’t seem to mind. They could take some lessons concerning hosting, although they are feeding me, and did bring food out to the cottage. It is always good to have some food around for self-catering.

I don’t think they want me to enter the main house for the reason that it’s a slight dump, their cars kind of show the inner picture. I carried the microwave from the sisters flat, and her flat was somewhat grungy, but not the microwave. So how am I viewing this situation? The accommodation is great; the olive cottage is a sanctuary of solitude for myself. I do ascertain and observe what needs to be accomplished on the land. I will be working and accomplishing the work for the exchange for the food and accommodation, although I will try to maneuver the situation so I can stay at the olive cottage more often. The sisters did say I would be going back and forth from the main house to the cottage.

I do know they want to get the work accomplished, but their cold, distant behavior is odd. However, I have been around such dynamics in life—they are carrying shame because of their lifestyle, and are embarrassed of being totally incapable of taking care of the small amount of land they own, although can be common within this world. In addition, their coldness, not having a clue concerning warm hospitality is result of western imbedded culture based on fear and isolation. This next week should be interesting.

A continual subject I observe is that humanity struggles dealing with life itself. It is ironic.