The Temple of Isis at Philae – Aswan. 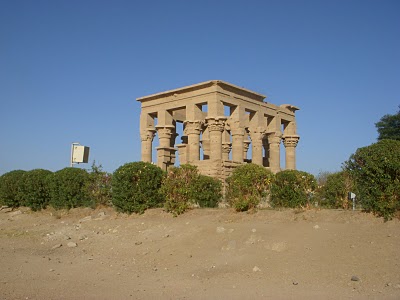 I just took a micro bus to the cut off road and walked 2.5km. I am getting stronger and stronger from walking so much, up hills, stairs, with my day pack on, also with my complete backpack when I move on from a town. At the boat dock the captains were trying to charge a lot and I was alone, although looking for a group for the boat ride was the trick to a low cost. I ran into a nice French family who was on a two week holiday, the daughter was quite cute and spoke good English. When she saw how I started to bargain for a good price her eyes opened wide and said she can tell I have been Egypt for awhile. We had a wonderful time visiting, they’re going to visit the White Desert and Al Qasr upon my recommendation. This is a beautiful area of Aswan, the temple is well worth visiting – despite the entities that are attached to the temple and attention they get from the tourists. The lower entities draw energy from the attention – their attached like glue. Regarding what I have written of Upper Egypt, there are some very good people that live within this cultural of slavery. Their life situation is because of their karma. Karma dictates life. For anybody living in America sitting back with their ego involved, thinking that these types of aspects don’t take place in a “free country” – think again. Take a close look at the culture of the so-called bible belt in the south, the upper Midwest, or the mid-section of America; all over the world human behavior is the same. The majority of the masses are inflected with demented thinking, idol talk, preconceived ideas, ego-driven – mocking of others, concluding with their own judgments due to their ego-driven demented mentality. Living with a low self-esteem, bored, lonely – separate from Divine favor; psychologically they try to feel better about themselves by putting others down, laughing, mocking, ridiculing their fellow man which Moses taught you mustn’t do. Paul clearly taught that each of us should mind our own business and live a quite life. There is a common type of human behavior which the world is inflected with. Moses clearly taught about human behavior. Once a person clearly understands what Moses taught; at this time a person will be able to observe the inner motivations of the heart, even if you don’t understand the local language. Each religion is dogmatically positioned with an ideology based on cult control by using fear, guilt and shame. As I learn about Islam and clearly teach the inner falsehoods and the programing cult ideology, don’t allow your ego to think that Christianity is any better. Every religion is under the power of the wicked ones, including this whole world. Christianity is filled with Idolatry – the organization is drowning in their blood guiltiness.