The Tourist Syndrome in Egypt.

These first three pictures are of the Citadel and distant shot of the Pyramids. 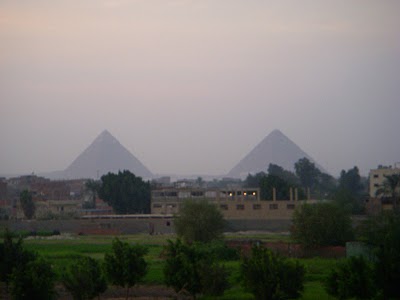 These next three pictures are of Alex. Today was interesting, I hooked up with a few tourists for some touring. One guy was from New York visiting Egypt for a week and a couple from France and one couple from Belgium. I must say what an experience. We went to Rosetta, the town they found the Rosetta stone at.

The town itself was quite gruelling, dirt roads, garbage all over, but friendly people, very poor. Just smile and wave and say Salaam Alikom, they love it. We had to take mini vans to get there, I would say it was about 50 miles. Changed buses about three times. Then the first museum was closed and these people had a fit. We did see the fort where the stone was found and one other very old house. 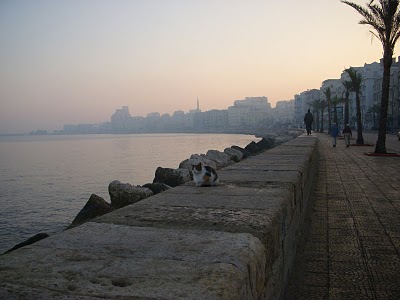 The french lady flipped out toward the tourist guide in the middle of the street, and the Belgium couple decided to lose us, I hope they made it back OK, just because of the transportation hassle. I found the whole thing funny. I am happy I am a Mu-sa’ferr, meaning traveler in Arab. The New York guy was getting his kicks from seeing a cow in the field, although it was nice to hang with another American for awhile. Now I know why I am traveling alone. The last couple of days I have been tested in a few ways, today was an eye opener. Dealing with the Egyptians in the proper manner is what matters, I am learning quickly. The tour guide thank me and said I was a good guy, I did not bitch and moan over the cost. With a great lunch (fresh seafood) and the tour was only $40.00. The best meal I have had since I’ve arrived, top dollar is what I mean. I just don’t want to get suckered, which has happened twice, but it is OK, it’s bound to happen. 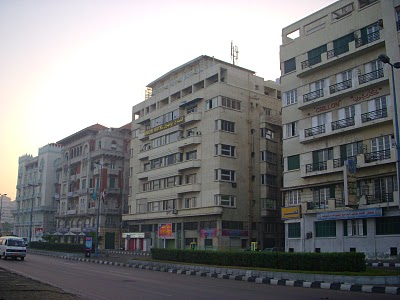 This is my Hotel in Alex by the sea.

One guy at one of the museums, I showed my five girl friends from my camera, sorry gals but I had him rolling on the floor, it is kind of a joke that Americans have four five girl friends. On the way back I was able to sit by a very nice Arab girl. Theses girls are different. Pure. Modest. I showed her pictures of family and even Kuttles, the guy behind us translated the best he could. We smiled and waved for the goodbye. I have to admit these girls are exotic, mysterious, beautiful.

I would have not seen the town of Rosetta if I had not of went with in the moment of the morning. I will post pictures of Rosetta soon.