Last Saturday, along with visiting Sidon I also visited Tyre. Tyre suffered during the civil war and war with Israel; there is a strong UN presence and a large Palestinian camp in the area. The history of Tyre dates from the third millennium BCE. Originally, Tyre was an island city that stood firm, and averse to the powerful invading kingdoms, even King Nebuchadnezzar of Babylon failed at conquering the island.

At the time of Alexander the Great, Tyre was considered impregnable. Alexander took upon the feat to build a causeway. Under constant fire from the island, the land bridge was completed after the toil of several months. Alexander built the tallest siege towers ever used in the history of siege warfare. Alexander, the greatest military conquerer in history, besieged Tyre, and massacred the 30,000 inhabits; the remaining inhabits were sold into slavery. After the causeway was built, the battle raged for seven months until Tyre capitulated. The causeway remained, and Tyre became a peninsula. 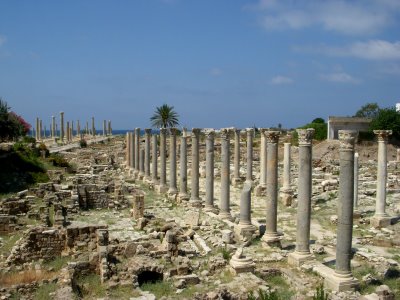 During the time of King’s David and Solomon of the Israelites, King Hiram was the monarch of Tyre. Hiram sent cedar, adept workers, and gold, for the building projects for the Kingdom of Israel. Hiram was granted the district of Galilee in return. Tyre was a major trading port during this era.

I found it impossible to recognize where the border of the island might have begun. The peninsula is mostly city, although narrow enough to walk. I didn’t get that good of pictures while I was there. In addition, the main archaeological site I viewed from a distance, because of the relentless sun, and the entrance was a long distance to walk. Everything that you may hear concerning the danger of Southern Lebanon is false. The populace is focused upon their lives. I experienced people to be very friendly. I had lunch and got my haircut in Tyre.