As they dug further into the ground, they left stone pillars that supported the ceiling from caving-in. The last picture is of a skeleton from the Rockefeller Museum. There is no comparison of the Archeological remains in the museums in Israel than in the surrounding countries, the museums in Israel are lame compared to Egypt, Syria, and Turkey. The museum in Istanbul is the most outstanding to date. 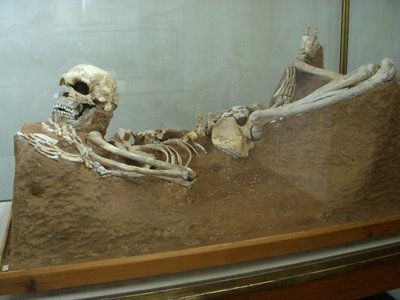 The Jewish Quarter consists of a modern appearance. I experienced a considerable change of energy trekking from one quarter to the next within the old city. Earlier in the day I walked around the Christian quarter that is also Arab, but Christian. I don’t have much of an interest in visiting the churches; my interest is visiting with the Palestinians and the geographical position of the city. However, I will be visiting the Dome of the Rock on the Temple Mount soon.