This is a picture of the main square in Cairo, the Egyptian Museum is the big pinkish building. The picture was taken around 10AM 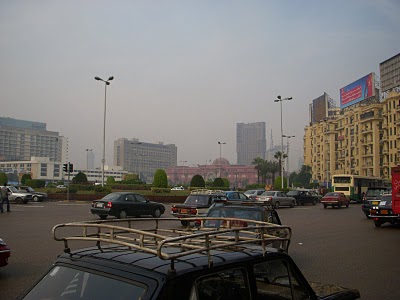 This picture was taken around 12:30PM. The smog has lifted slightly; a clearer picture of the Egyptian Museum.

Today I am just hanging out in the neighborhood of Maadi. Checking out all the stores and might get some good baked bread at the high class bakery in town. The guy from Minneapolis left for Aswan today. Yesterday was an interesting time at the Pyramids. The inside of the Great Pyramid was amazing. I don’t understand how they built the grand corridor leading up to the burial chamber. The burial chamber could have been build on the level they were working on. Basically, you walk through a tunnel to this small square tunnel, very small; that leads to the grand corridor. I didn’t count the amount of steps, although, it is a major climb up to the chamber. Once up to the chamber, you end up in a large size room made out of granite of perfect cut stone. The whole structure is very perplexing. Before we went in the Great Pyramid we went into the queens pyramid which was interesting in itself. A long descent down into the burial chamber. All three pyramids can be accessed on a daily bases. The great pyramid only allows 300 tickets to be sold per day. 8AM and
1PM only. 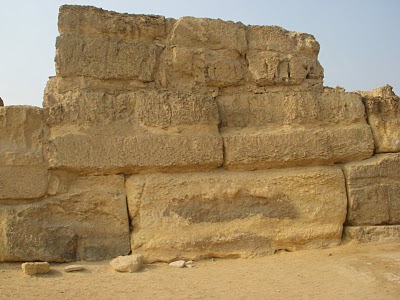 Another idea regarding the building of the pyramids; if they could have made strong enough rope, and a way to pull the boulders up with people guiding the stones on each level, the problem is moving the stones. Keep in mind it is possible to climb up the pyramids. They could have climbed up to the level they were working and with enough people pulling the stones up. Many claim they made ramps; from the size of the pyramids it is difficult to imagine this concept. I am so into pondering this idea, and effected from the energy of the Pyramids. I will be going for a third time to Giza, I want to walk inside the other two pyramids. There is also a light and sound show they do in the evenings in front of the Sphinx that I might check out. This is a picture of the entrance to the Great Pyramid. This is a picture of the Great Pyramid looking up.
They have a very nice Opera house here in Cairo, I might go see a show on New Years Eve night. My time in Cairo is going very well. I got free from mosquito bites for awhile, although, I was just bitten fiercely on my lower back. I cannot believe it, I don’t know if they get under the blankets or what. If so, then they are very intelligent blood sucking mosquitoes. I most likely will end up sleeping fully clothed to prevent this from happening. I also bought some nice underwear at the mall, the reason being; I’m walking so much that going without has been causing friction and a skin rash. I bought the kind that wear down on the thigh to prevent the inner thigh from rubbing together. It does add to the backpack, but I have found wearing some underwear to be essential. Always need to make adjustments as each situation demands. The Great Pyramid showing the entrance. The desert with Giza in the background. These two pictures are of Giza from the area of the Pyramids. I was sitting on the Great Pyramid when I took this picture.

Here are some pictures of the Nile Felucca cruise I went on with my female Egyptian female friend. 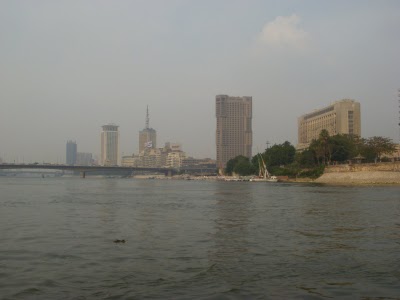 The tall building in the middle is the Ramses Hotel. It was a cloudy day, it is not all smog your looking at. An Obelisk in the background. The Nile River is really amazing, without Egypt would not exist.