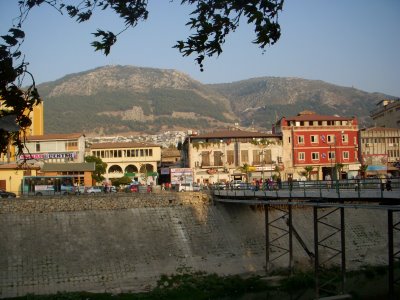 The pictures are of Antakya.

I arrived in Gaziantep (Antep) today from Antakya, a three-hour bus ride. The route was very beautiful driving along the mountain landscape. Driving into town the temperature was 31 degrees Celsius, although much dryer than Antakya.

The amount of people that can speak some English is less than a handful. I cannot believe it compared to the other countries I have traveled, even so, if you know where you are going, and what you want, everything works out fine. Using the essential basic Turkish phrases in the back of the Lonely Planet book is helpful; I just show them the word or phrase. Certainly, I am off the tourist trail, I have not seen any tourists since I have entered Turkey. I will be staying two nights here in Antep; from here, I will be heading to Sanliurfa for a couple of nights. I bargained to a price of 17 Turkish a night at this hotel in Antep with free wireless Internet. Transportation is very expensive here in Turkey; I paid 18 Turkish to travel from Antakya to Antep. 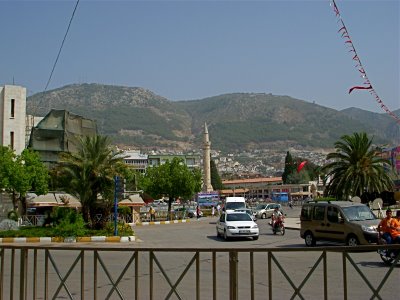 There is a good chance I might head to Georgia for two weeks once I am in Kars. Ramadan is starting tomorrow. I have already started to decrease in my food consumption because of the heat. In Syria, and this southern area of Turkey, the air-conditioning and refrigeration is very inadequate to the point that not many people use their air-conditioning. I have not slept in an air-conditioned room since I left Beirut. I have to admit the heat can change some chemistry within a person. Americans are very good at complaining about the heat because of an engrained spoiled attitude, complaining creates a difficulty in properly dealing with the heat. If a person fights the heat they will not win the battle. It is essential to stay relaxed, allow yourself to sweat, and don’t complain—acceptance of the heat is vital. 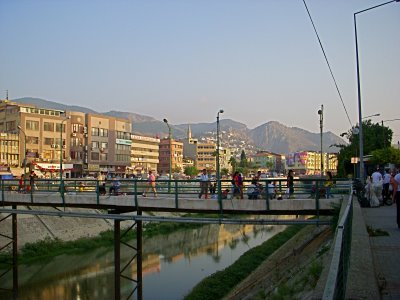 The longer and further away I am from America I can clearly perceive how spoiled, wasteful, overly sensitive, and extremely anal attentive Americans have become (this is not an absolute generality). The subject and conflicts that Americans engulf themselves in is futile. The wastefulness of energy is a subject that I observe to be overwhelming. A person can conserve several ways on the energy bill. Decreasing the water heater, or turning it off at night or while you at work may help. Turning your power off for three or four hours a day from the circuit breaker can help, although this though can boggle the spoiled mind. Hanging clothes to air dry may help conserve energy and is much healthier for the clothes. I have known people that run all the lights on in the evening; their behavior manifests some type of fear of the dark or the feeling they get from the dark. From my observation formerly, many inattentive, wasteful Americans have never been abroad to ascertain an alternative lifestyle. The over-sensitivity to odors is a subject in itself. Americans have subjected themselves that causes a robotic natural that produces rules beyond normal human nature. Normal human body odors, without the mixture of under arm deodorant, wearing clean clothes, a person that eats healthy, and showers regularly, I find to be perfectly normal. I have not worn a deodorant for months now—nobody cares. Naturally, I would wear a deodorant if I would go ballroom dancing.

The current administration has been showing their affirmative arrogant, deluded face. I don’t support war or the aggression of one country invading the other, although the current American government got bent out of shape because Russia invaded Georgia, saying, “this is the twenty-first century, and nations don’t just invade another country.” I wonder what century the American government invaded Iraq? The Bush administration lied concerning Iraq possessed weapons of mass destruction; they lied portraying that Iraq was a threat to the peace of the West. Total fabrication that caused a justification that caused the deaths of over 3000 American men, countless injured for life, countless men come back with psychological problems that become untreatable resulting from the slow bureaucracy. Iraqis that have been killed and displaced is staggering. Devastated Iraqi families having to move from their homeland that the surrounding countries would rather not except, including America, owed to the fact they won’t allow Iraqis migrate to America. Who says that one country cannot invade another? The American government ignored the UN resolution forbidding the invasion of Iraq and could only muster Britain as an ally; the whole European Union was averse to the invasion of Iraq. Indeed, Mr Bush Jr will go down as the most failed president in the history of the United States. The slow response of the current government when Katrina hit New Orleans proves that their interests are egocentric and wicked; sitting around at meetings and press conferences while the poor people of New Orleans were starving and dying displayed to the world that the Bush administration is inadequate of helping their own people. Sending the army into a disaster area is difficult when most of the army is based in other countries policing the world. 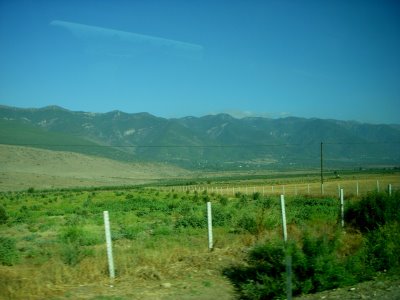 I took this picture from the bus on the way to Antep.

Get ready to brace yourselves for Gustav that is heading into the Gulf, possibly, more natural destruction that could cause higher fuel and food prices this winter—just wait until you start heating your house. Most people do not understand why were seeing such fast inflation. One year before Alan Greenspan retired from being the chairperson of the Federal Reserve, I met a person up at Serria Hot Springs. He was telling me that Ben S. Bernanke, who will be taking over for Alan Greenspan, is a person who likes inflation. Ever since the chair changed hands, there has been constant inflation.

If the American people vote McCain into office that will prove the ignorant inattentiveness based on media brainwashing that is at a catastrophic level. The founder fathers continually fought against the trap of the greedy international bankers who are of the darkness. President Wilson signed the agreement that formed the central bank of the Federal Reserve that stems from the Rothschild’s family in Europe. On December 23 1913, when half of the congress was out of office, those congressional representatives that were present passed the law that formed the Federal Reserve. In addition, American wages were never taxed except for during the Civil War, after the Civil War the taxing of personal wages was abolished because it is against the law according to the 16th amendment of the United States. The formation of the IRS after 1913 is illegal, this is why the IRS use fear as a control tactic, don’t pay your tax they will come at you with a club. Very few Americans understand this truth of the country, many do not even want to know, for the masses—ignorance is bliss.

One subject I have been astonished with is when the truth of the formation of these illegal entities and that 911 was an inside job—95% of people will use the phase “conspiracy theory” a phrase from the movies that have embedded deep into the minds and hearts of westerners, even people in the Middle East would use that phrase. The more I observe people comments on the discussion board on Blog Catalog and read some American news proves the power of the media and how people are frail to propaganda.

Jesus taught in parables when he lived on the earth, because the common person was not meant to understand the truth. The truth is granted to his chosen followers, not the common public including people engulfed in religion. Thus, the common public will never understand, nor are they meant to understand the truth of the Divine Plan. Fear will block the majority of the populace to comprehend that this whole world is under the power of the wicked ones and is pointed to the arrival of the Man of Lawlessness. The ignorant will be forced to face reality.