Giresun is not a town any tourists stop at, although it is a nice modern town with the old charming atmosphere. Giresun produces Hazelnuts and Cherries, the area is known to have the best orchards in Turkey. 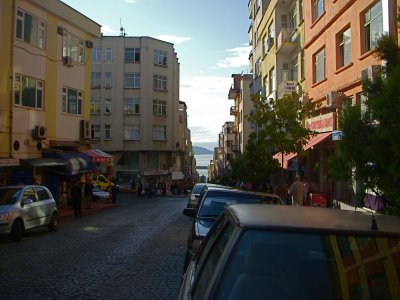 The stories of certain legends the public perceives as a myth, although certain “myths” have some truth within the story. The stories depicted in the movies of The Clash of the Titans, The Odyssey, and Jason and the Argonauts provide hidden gems that requires a spiritual eye and inner discernment. Vital lessons of life and wisdom are hidden in the old folklore stories of legend and a person can benefit from studying the story. Giresun is kind of an expensive place. The hotels cater to businessmen. The girl working at the desk of the hotel I am staying at gave me a good deal. The hotel is a three star hotel, the price was 65 YTL, although I got one night for 40YTL, this one time paying 40 is OK, I have did quite well on my budget. I will be heading out to Unye and skipping Ordu. From Unye I am going to head inland to Amasya, a town highly recommended to visit. After Amasya, back to the Black Sea for Sinop and to Amasra, the drive between these two towns is the ultimate scenery of the Black Sea Coast. From Amasra I will be heading inland toward Cappadocia and the Mediterranean coast. 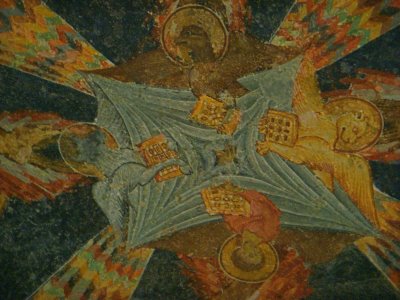 Up until now it has not rained, I have been carrying around rain gear since I departed—I know why I kept the rain gear, for days like today. Two nights ago in Trabzon, a wonderful thunderstorm occurred. After being in the desert, and hot weather, I found the thunderstorm to be pleasant and refreshing. 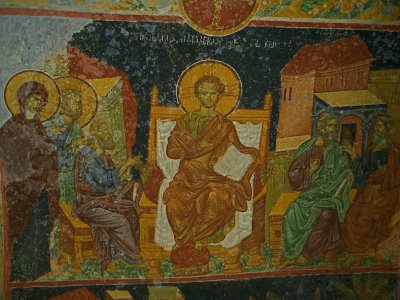 Notice the strange expression that the artists portrayed during the Byzantine era.

Some of the landscape on the Black Sea Coast of Turkey is blemished from the unsightly buildings that are built, although if a person can see beyond this obstruction of buildings, the coast is a beautiful site. The offerings of the modern world—some junk food finds its satisfaction within.