I must say Port Said is a very nice place, a major contrast from Luxor. Everyone is friendly and honest, for the most part. Of Course, when writing regarding positive and negative qualities; it’s not to be taken as an absolute generality. The effect of an ocean is my theory; the Mediterranean Sea releases an atmospheric calming energy. A wonderful body of water it is, we will meet again. I would say Port Said is the most liberal town I have visited. People do mind their own business. Indeed, I am comparing Port Said to Upper Egypt. Of course, there’s the same infrastructure, the normal noise, many people in the streets – this is normal as in any other town or city in Egypt. Building up a tolerance is key to putting up with the cultural difference. Here in Port Said it is noticeable that there is more money here because of the port to the Suez Canal. It is amazing how economics can have such a impact upon people in the world. People just want to be comfortable in life. There are very few people on the streets begging for money compared to the other sizable towns and cities in Egypt. 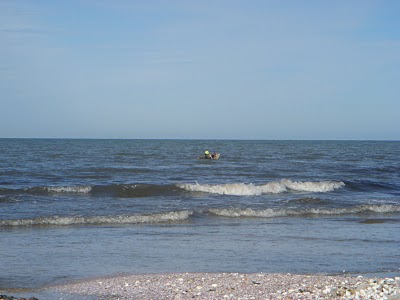 The Internet is only 2LE per hour, bananas are 2.50LE per Kilo, tea is only 1LE per glass – basically Port Said can be very inexpensive to visit. The hotel is your basic type, although it is freshly painted. The building itself is old, which can make the hotel look dirty. Other travelers have commented on this regarding cleanliness at hotels, nevertheless, the hotel does have regular cleaning ladies that clean everyday, I have met them. There is a difference from dirtiness or just old flooring tile and old beds combined with an old building. I did have my choice of having my own bathroom next to a shared bathroom, I went with the shared bathroom which costs less. The Australian couple that I ran into said they have had it with shared bathrooms for the rest of their trip. Although, at every hotel I have stayed at the bathrooms are cleaned everyday, the bathrooms are just old. Having your own bathroom in the room is more convenient, though. One other item to not forget is a sleep sack, which are made out of silk. On E-bags.com you can search “dream sacks” to find them. Some hotels might not change the sheets, in this situation the sleep sack becomes handy, plus it’s nice to sleep in silk once in awhile. The sleep sacks compacts very small and are light weight. An eye mask is also important to bring. Many hotel doors have an upper glass window which can keep the room kind of bright. I do turn off the outside lights before I go to bed, although some people will turn them back on. A sleeping eye mask can be a item that is useful, which you can order through E-bags.com I will be heading out to Ismallia on Saturday as it looks right now. Ismallia is in between Port Said and the town of Suez on the above map on the Suez canal. After I couch surf in Dahab I might head to Mount Sinai and stay at a Bedouin camp in the town of Al Milga. I am looking to head to Jordan May first. The reason is that my interest from the bank is added to my account the first of each month. This way I can budget each month as I go, Jordan will be more expensive. The max stay in Jordan is three months from what I have read. I might have an exchange situation in the Wadi Rum at a hostel. The guy is looking for someone to create a website for his business and work the desk about four hours a day. I am going to e-mail him and offer creating a nice blog site as a website, which will be much less expensive and easier to maintain. We will see if it happens.

When I was visiting Heliopolis in Cairo I stopped in at Compu-Me computer store. A great store for laptop PCs. I was considering a laptop called Acer built in Korea with Intel and IBM hardware. I was a nice small 12″ laptop, only costing $1100. I don’t think I could cross over to PC from Apple. I would rather just spend the extra $500 for a regular MacBook. Computers are more expensive in Egypt because of shipping and tax. The next area where they will have big stores will be in Amman, which I will take a look around and consider the idea at that time. With the MacBook Air they didn’t make it with a Ethernet port. Without the port the only way to connect to the Internet is wireless, which many net cafes don’t have wireless Internet, although you can use their Ethernet cable to plug into your own computer. It’s a toss up considering the difference in weight. Therefore, I will wait until the time is right.

I met a really nice person last night. He works dishing up ice cream in the street. We visited for a good three hours when he didn’t have any customers. A very nice person with an open mind. We discussed the different cultural aspects of America and Egypt. The idea of meeting a women, getting to know her, hooking up as boy friend and girl friend, and even living together without the legal paper signed – most Egyptian guys like the idea and the freedom that is involved in America. The younger generation would like to see a change in their enslaved culture, although, they know there is no chance of change in that way. The only way out is the free countries of the west. The guy and girls that are out holding hands and having dinner together are engaged or married, nevertheless, this is something you will not observe in Upper Egypt. The majority in Lower Egypt agree that the Upper Egyptians live in ignorance.

This morning I also had a good conversation with a guy that also spoke good English. With these conversations the subject of religion usually comes to the surface. Due to the fact that I am reading a certified translation of the Quran and understand their thinking – we end up having a respectful conversation. Consequently, even with their sizable opened mind, their religion is glued tight into their core. It is the same locked door because of their programed upbringing. The Bhagavad Gita and The Dhammapada doesn’t exist, nor even a consideration to learning the clear truth. There are strongly convinced the Quran is the truth, just like all the other religions. They all mention about energy and feeling that the Quran speaks to them, also the energy of the Kaaba the stone house which they pray towards. The energy hits them deeply – they “know”. The lower entities certainly can transform themselves into an angle of light and put forth major energy in front of the blinded eyes of humans which can touch the core. A major deception, just like Christianity and their sun god.

Here in Port Said people certainly are not playing the victim as they do in Luxor. People are not in want of what I have, nor are they afflicted with bazaar negative emotions because I am from the west had have money for travel. An entirely different energetic entrainment of mentality here in Port Said.