On Friday, I went walking through the old city of Jerusalem. I found myself at the western wall and took the above picture. In addition to Islam and Orthodox/Catholic Christianity, the men in Judaism are favored over the women. The men own the largest area of the wall. Although, the wall itself is small compared to a picture a person may view.

Entering the Jaffa gate, the security is extremely noticeable, the police and army are stationed several places on the way to the Dome of the Rock and the Western Wall. Most of the shop owners are Palestinian/Israeli Arab, Christian, or Muslim—this is a reference to being an Israeli citizen. There are Palestinian Arabs who has a permit to work in Israel that own shops within the old city.

Artwork on the barrier wall in Bethlehem. 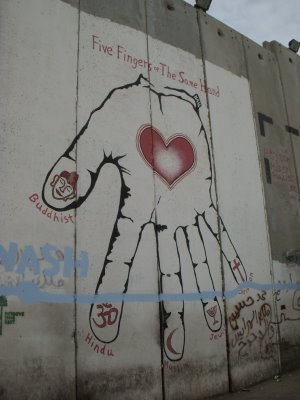 From the Western Wall I walked past the City of David to the Mount of Olives where I met an honest and fair Palestinian/Israeli Arab citizen who drove me to the see the barrier wall and to Bethlehem, I will be calling him to drive me to Jericho and Ramallah, too. The West Bank and East Jerusalem are liken to any other Arab town or city. The Palestinians on the other side of the wall are friendly and welcoming. The barrier wall is a tourist attraction in itself. Not one Israeli that I visited with has been to the West Bank, they are fearful it entering. Number one rule for a traveler: Never listen to anyone who talks about a country if the person has not visited the country. A person’s distant perception is cockamamie hogwash. I liken the Israeli disposition as the early Americans; fear engulfed the first settlers of the United States that motivated them to build walls around their settlement, which was at Jamestown. The Palestinians have their own passport, license plates, national flag, police force, and government. The Palestinians do use the Israeli shekel of currency, though. The Palestinians can travel to Jordan and the other Arab countries. This explains why the wall extends through Jerusalem (the picture above) cutting off Adu Dis; the Arabs that are west of the wall are Israeli citizens.

It is a strange situation. Clearly, outside interests, third parties that include the West and Arabs are playing the game, and the game is money. 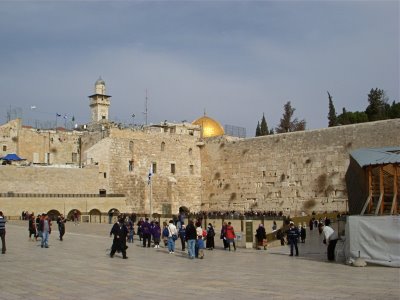 The driver dropped me off at the Lion’s gate, and I walked through the Muslim area of the old city to the Damascus gate into East Jerusalem—I viewed the area similar as the poor area of Amman in Jordan.