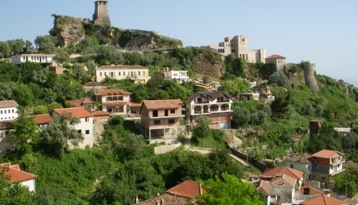 Sounds strange, a town of all Men? but I asked around, and every person said, “no girls in Kruje”. There are young high school girls, but they all leave for collage and most men stay. Kruje is embedded on a mountain slope only thirty kilometers from Tirana, and was the stronghold and held out the longest against the Ottomans. Albania’s national hero, Skanderbeg, successfully opposed the Ottomans for nearly 35 years from 1443 until 1478. The castle of Kruje was successfully defended in four sieges conducted by Ottoman forces before final capitulation shortly after the death of Skanderbeg.

The LP writes that Kruje’s bazaar is one of the best in the country, yeah, because it is about the only one. The bazaar in Kruje is unique as they hand-make their carpets in their own shop, and the cobble stone walkway is very old with smooth stones. Remarkably there are no vegetable markets here in Albania as in the neighboring countries, which is a surprise since Albania stems from the Ottoman influence. The farmers seem to pick the tomatoes to early because they are always slightly green inside, the worst tomatoes I have ever eaten. The Rice and the Kofta are OK and very cheap, rice is mostly 70 lek and the Kofta is around 30 lek each. But, it is kid of funny, once they comprehend your a foreigner they really don’t like that you order the cheap food, but it is the best food including the bean soup at 100 lek. 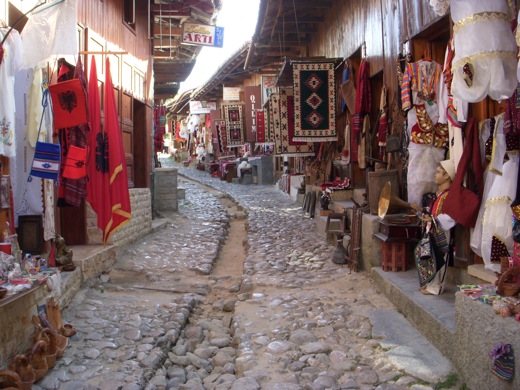 The Only Bazaar in Albania.

The hotel I stayed is located in a prime spot for a panorama view of the castle the mountains and they had decent food. During the evening I visited with some guys and it is confirmed—all men in Kruje. From my observation traveling around conservative towns that hold on the old way of thinking concerning family reputation, and that the daughter can ruin the family, but not the son—clearly karmic bonds dominate these towns that manifest a majority of men, ironic wouldn’t you say? However, I did met a wonderfully cute girl that works with her mom near the castle; we sat a visited for a good hour. Most of the girls will go to Tirana for collage and move on from Kruje because of the male domination and the severe small town gossip syndrome. 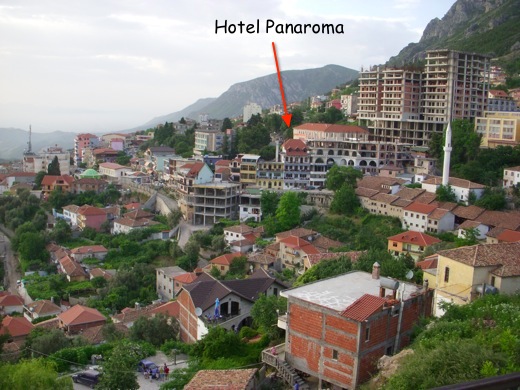 The Town of Kruje

The ride from Durres to Kruje provided some entertainment. The mirco-bus guy created an illusional idea in his head. Once we got to the valley town of Fushe Kruje about 10 kilometers from Kruje. Everyone in the bus was getting out for Fushe Kruje. The driver shows me 2500 lek and wanted that much for a ride to Kruje, the correct price is only 300 lek. So I found someone that spoke English and this driver thought I was just going to visit the castle and go back to Durres; his perception was that I came from Italy on the boat for the day which is popular. Even with the guy translating from English to Albanian, this driver could not ascertain anything other than wanting 2500 lek, he would not give the current rate of 200 lek from Durres to Fushe Kruje. So after us yelling at this driver and telling him how stupid he is acting, we walked away, he drove off, and no money was exchanged. This shows how the ability to problem solve is void with many people of this country, but not everyone. I caught another mirco-bus up to Kruje, from Durres to Kruje I paid 70 lek total, about 50 cents.

In Kruje I met a German guy at the hotel that was driving north. I caught a ride with him to Lezha and then I caught a micro-bus to Shkodra and was dropped off in front of the guys that drive to Montenegro. So we started talking and the going rate is 20 euro to Ulcinj, but for 30 euro they will drive the coastal city of BAR. I have had enough with the bad food and the stupidity of the country of Albania. I did meet some very nice and intelligent people throughout my travels of Albania. Yet, combining the shiftiness and strange behavior of victimization it just ended up that I found myself in BAR in the afternoon without any this being planned. Albania is one of the last countries I would do a return visit, it goes next to Israel on the non-retrun list. 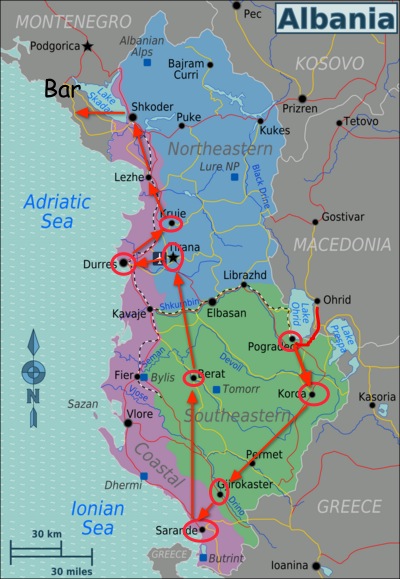 Here in BAR I found a home that rents rooms two blocks from the beach, there are many homes that rent rooms, but instead, I got a two room flat with a kitchen for only 15 euro a night. I will have a post up soon.