Konya is the place that Rumi produced the mystic branch of Islam, although many Moslems of Egypt, Jordan, Lebanon, and Syria have never heard of Rumi. However Rumi’s tomb in Konya receives 1.5 million visitors a year, mostly Turkish Moslems and Western tourists. Rumi and his writings are popular in the West. Rumi attained enlightenment and produced writings such as The Mathnawi and The Ghazal Poems that was collected into The Divan-i Kebir that are based on a higher level of consciousness. The independent spiritual student can included Rumi’s writings into their study program, a fine alternative to reading western scripture for a person that is disgusted over western religion and dogma. 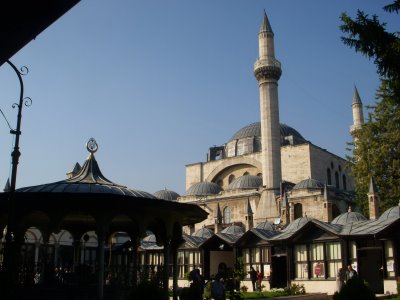 The name Mowlana Jalaluddin Rumi stands for Love and ecstatic flight into the infinite. Rumi is one of the great spiritual masters and poetical geniuses of mankind and was the founder of the Mawlawi Sufi order, a leading mystical brotherhood of Islam. The Mawlawi Sufi religion was pursued by Rumi’s brothers and companions, such as the teachings of the Buddha—his followers created Buddhism. All the religions of the world were formed after the teacher died. Nevertheless, detaching the religion from the writings is indispensable. Many people may view the writings from Rumi as philosophy, however—the deeper truth of life, and writings, are based on a higher level of consciousness that the common person should strive to comprehend.

Some people have commented that the saying on my card “all provisions materialize in the moment” is philosophy—it’s not philosophy—it’s the truth, although the reality of the moment can be difficult for the common person to comprehend. At any rate, the writings of Rumi can be added to personal reading based on spirituality that can also include: The Bhagavad Gita, The Dhammapada, The Tao Te Ching—writings that can provide an alternative to the Western dogma of religion. In addition, The Mediations of Marcus Aurelius is an excellent book to study for a non-religious person. I will be writing more about Marcus Aurelius at a later date.

Taking photos was forbidden in the Museum. The museum is worth the visit, in addition, there are many stores that sell English books of Rumi’s writings. This entire time in Turkey I have not come across any English books.

Rumi was born in Wakhsh (Afghanistan) on September 30 1207 CE to a Persian family of learned theologians. Escaping the Mongol invasion and destruction, Rumi and his family traveled extensively in the Muslim lands, performed pilgrimage to Mecca and finally settled in Konya, a part of Seljuk Empire. When his father Bahaduddin Valad passed away, Rumi succeeded his father in 1231 CE as professor in religious sciences. Rumi at age 24, was an already accomplished scholar in religious and positive sciences.

He was introduced into the mystical path by a wandering dervish, Shamsuddin of Tabriz. His love and his bereavement for the death of Shams found their expression in a surge of music, dance and lyric poems, `Divani Shamsi Tabrizi’. Rumi is the author of six volume didactic epic work, the `Mathnawi’, called as the ‘Koran in Persian’ by Jami, and discourses, `Fihi ma Fihi’, written to introduce his disciples into metaphysics. 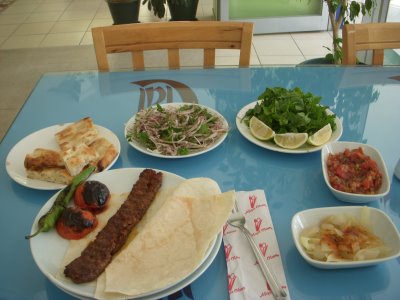 If there is any general idea underlying Rumi’s poetry, it is the absolute love of God. His influence on thought, literature and all forms of aesthetic expression in the world of Islam cannot be overrated. In the below excerpt notice Rumi’s expression concerning non-dulaity, and understanding the benefits to a non-positional status.

What is to be done, O Moslems? for I do not recognize myself.
I am neither Christian, nor Jew, nor Gabr, nor Moslem.
I am not of the East, nor of the West, nor of the land, nor of the sea;
I am not of Nature’s mint, nor of the circling’ heaven.
I am not of earth, nor of water, nor of air, nor of fire;
I am not of the empyrean, nor of the dust, nor of existence, nor of entity.
I am not of India, nor of China, nor of Bulgaria, nor of Saqsin
I am not of the kingdom of ‘Iraqian, nor of the country of Khorasan
I am not of the this world, nor of the next, nor of Paradise, nor of Hell
I am not of Adam, nor of Eve, nor of Eden and Rizwan.
My place is the Placeless, my trace is the Traceless ;
‘Tis neither body nor soul, for I belong to the soul of the Beloved.
I have put duality away, I have seen that the two worlds are one;
One I seek, One I know J One I see, One I call.
He is the first, He is the last, He is the outward, He is the inward;
I know none other except ‘Ya Hu’ and ‘Ya man Hu.’
I am intoxicated with Love’s cup, the two worlds have passed out of my ken ;
I have no business save carouse and revelry.
If once in my life I spent a moment without thee,
From that time and from that hour I repent of my life.
If once in this world I win a moment with thee,
I will trample on both worlds, I will dance in triumph for ever.
O Shamsi Tabriz, I am so drunken in this world,
That except of drunkenness and revelry I have no tale to tell. —Divan-i Shams In classical Sufism the continuum from the false self to the essential Self has been described in seven stages. Note that the number seven is the number of complement. The word for self, “nafs” (nefs) is also equivalent to soul or spirit. The Bhagavad Gita refers the Essential Self as the “Atma”. The correct view of soul should be spirit, the inner person is spirit, thus the soul.

1. The self of compulsion seeks satisfaction primarily in satisfying its selfish, carnal desires and its will to power. It is mentioned in the Surah Yusuf (Yusuf Suresi), verse 53, of the Qur’an as the self (the person) is impelled to evil.

2. The self of conscience has begun to discriminate between right and wrong, and can sometimes resist the temptation to evil and selfish actions. It is mentioned in the Surah Qiyyamah (Kiyamet Suresi), verse 2: I call to witness to self of conscience.

3. The self of inspiration is inspired with spiritual knowledge and can reliably follow the voice of conscience. It is mentioned in the Surah Shams (Sems Suresi), verses 7-8: By the soul and the proportion and order given to it and its inspiration as to its right and its wrong. This is the highest stage that conventional religion and morality achieves.

Please note: Level 3 is the highest stage conventional religion can achieve, this is why, once a person is strong enough after growing within religion, it will be essential to leave religion to continue to grow. The independent path is the only path to the higher levels of enlightenment, person must be free from the duality and positional nature of religion.

4. The soul of tranquility has reached the level of presence in which a conscious intimacy is possible. It is described in Surah Fajr (Fecir Suresi), verses 27-28: O soul in tranquility, return to your Lord well-pleased and well-pleasing to Him.

5. The soul of submission has reached the level where its desires and actions are in harmony with Reality. It accepts each moment as it is and submits itself to Reality. This is described in Surah Ma’idah (Maide Suresi), verse 122: Allah is well-pleased with them and they with God.

6. The soul of total submission is even more completely identified with the Universal Will. This is the stage of the great saints whose lives may be profound and miraculous example of human wholeness. These people are lost in God.

Totally submission is vital—transcendence of the ego is accomplished

7. The soul of perfection is a theoretical absolute, the perfected or complete human being as described in the Surah Shams (Sems Suresi), verse 9: truly he succeeds who purifies [the soul].

The higher level of consciousness provides perfection, although perfection within the absolute totality of the ultimate reality, which the ego is defused and the essential Self, or Higher Self, or True Inner Self is attained and experienced.

Stages 1 and 2 are more or less under the domination of the false self. Stage 3 might be called the natural self, whereas stages 4 through 7 represents various degrees of the essential Self.

The teachings of Rumi are a vast difference that what most Moslems believe, however for Rumi, Islam provided a foundation and his path. Rumi expressed a deeper level of spirituality for Islam and Moslems. Each unique path is provided for each person, a high level of consciousness can be attained through each path. Even so, the majority of humanity will be forced to live at a lower level of consciousness because of Karmic bonds.