The Hash House in Northeast ? Hello everyone, I have been having an interesting time couchsurfing in Maadi. Peter and I went on a Hash House walk. They are the Hash House Harriers. They are a group that goes on walks and runs and they are all over the world. I could do some hashes while I travel if I like. We walked through the Maadi area and then went to a villa for some interaction. I must say I went from interacting with very poor people to the very well-to do people of Cairo. It’s a major head rush. While walking in Maadi I don’t even think I’m in Cairo. I met a few Americans on the walk, one guy from Kan-ass, and a women from Minnesota who has been living in Cairo for the last 22 years. 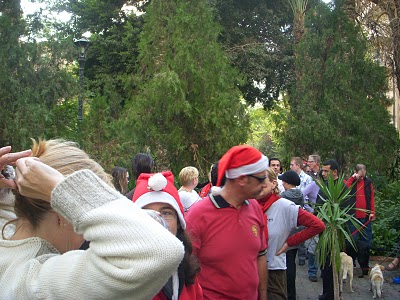 The introductions of the new people were interesting. We have to drink some beer at the end of the introduction, if you don’t drink it all then you have to pour it on your head. Basically they really didn’t know what to think when they found out that I was retired and a nomad traveler. Before the introductions, some people came up and asked “what do you into – oil or teach”, most people work in oil or they teach at the universities here in the Maadi area. The lead guy called me the rich guy who didn’t have to work anymore. Kind of funny, the perception of others. I personally hate introductions, although that is a part of the program with the Hash House. They were perplex about how I could travel for such a long time without making money. You folks in Minnesota are not going to believe this next story. Another couchsurfer arrived to stay at Peters last night. He came in and we asked where is was from. He is living in Senegal although from Minneapolis. I thought, Wow! and asked; where in Minneapolis, he said, Northeast Minneapolis. I was floored, couldn’t believe my ears. He lived on 5th avenue and has a U of M student ID. We went to the Pyramids today because he is leaving for Aswan tomorrow. We went into the Great Pyramid today, I can’t believe it, now I am really perplexed and bewildered. If you find yourself out in Giza you have to spend the extra money and go into the Great Pyramid all the way to the inner room of the king. A total head rush. 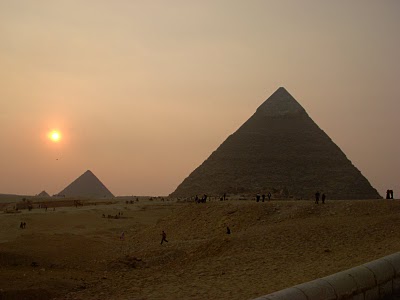 I know one thing; at anytime or anywhere you never know who you may run into. I mean who would think running into someone from the home town. We have had a very fun day. Life certainly has to do with the moment, it’s the moment and there is no other. What I am going to do or where I am going to be next month does not matter, I mean I am no hurry in life. Of course I wisely plan with a solid plan in the near future and tentative plans in the far future. Although, the moment is all there is along with consciousness. It’s the moment when something takes place. Wondering about the future is foolish. A person asking what I might do when I get back to America, to me seems like an out-of-touch question. The idea of giving everything up perplexes the mind of the well-to do. Having an interest in people is what matters in this world. It has been very strange how I have been running to certain people so far.

Quick update: My ankle is fine, kind of soar some days, although there is not any swelling. I have been able to walk just fine. This has been a learning experience. If I would have sprained it to the point I was not able to walk I would just take time off. If I would have broke it, well; I will just be layed up for a long time, it would be rough in Cairo, although, whatever the circumstances demand, a person has to deal with it. Of course if your on a three week vacation, a sprain would really mess things up.