Here is a picture of the Luxor Temple I took during the evening. I toured this temple yesterday. I also hired a guide in the temple area and found out much more informaion I would have not of known. Notice the two statues of Ramses the II? There was also six standing. There is only one that is standing which on your right.

The hotel I moved to is wonderful, clean, quite, and with an awesome breakfest. It’s a Bob Marley hang out place, with a wonderful roof top. I will be staying on the east bank until Wensday or Thursday. Some new develoments happened yesterday. I met a very nice felucca captain yesterday who didn’t mine take time, sitting, and visting. I have been asking around for a flat to rent. This person said that his family has a four house complex on the west bank and in his home he has an extra room. I decided to go over and see the house and meet the family. A major extended family; their father is quite old, although all four sons have wives and two of the bothers have kids. The one brother (who I met) is waiting a while to have kids. I met the whoe family and they invited me for a wonderful Egyptian dinner. We talked about the price and time table for me to stay at the house. I will be going moving to the house on Wedesday or Thursday and staying for two weeks, eating breakfest and dinner each night with the family. I am paying a fare rate, although I asked around the going price for a flat – this situation is what I have been looking for and it is a descent deal. I have been wanting to stay with a tridtional Egyptian family to learn the depths of the culture. Due to the fact that I did not spend any money in the month of January and just took out my interest for Febuary, I don’t mind paying a little extra, plus having a international teachers card is of great help. 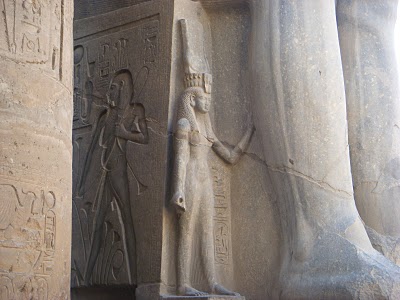 The wife of Ramses II holding on to the leg of her husband. The Avenve of Sphinks. The avenve of sphinks connected with the temple of Amun in Karnak which is 3 kilometers away. I will be visiting the gigantic temple of Amun at Karnak tomorrow. The held the Opet festival every October for Aumn, Mut, Kornos and fertilty, which they went from Karnak to the Luxor Temple on the avenue of the Sphinks. This picture shows the connceting bond of Upper Egypt and Lower Egypt. 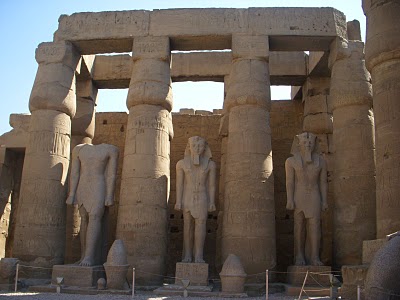 Statues of Ramses the II. There is two different sections to this temple. The first area is of what Amunhotep the III built. King Tutankhamun built a wall and there is a statue of him and his wife since he brought back the worship after King Akhenaten moved the capital to the Amarma area. Alexandria the Great built his own shine inside the holy of holies of Amun. On the gigantic wall from the entrance of the temple is a releif of Ramses the II and the battle at Kadesh. 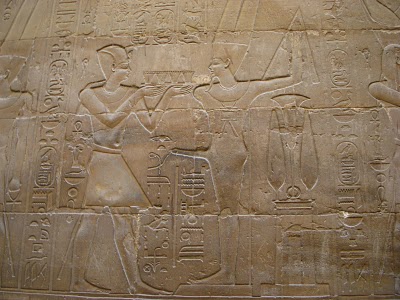 A ceramony of fertility with Amun, do you notice the male organ. No offense for who may be sensitive to sexuality. The Oblisk, there was two at the enterence of the temple, the other one is in Paris. I think France should return the Oblisk to Egypt.