The Temples of the West 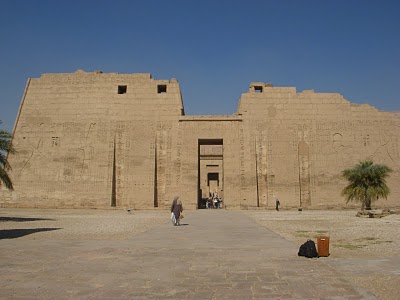 Today, I visted the Temple of Seti I and the Ramesseum which is the Temple of Ramses II and the Temple of Merneptah, which was one of the son’s of Ramses II. Yesterday I visted the Temple of Medinat Habu, another temple for Amun. Hatshepsut, Thuthmosis III and Ramses III constructed buildings here at Habu. What is clealy noticable are the shrines Seti the First built to gain the favor of the gods after the Amarna period. The temples of Karnak, Luxor, also within his own temples he built shrines to Amun, Mut, Krons – Christian Trinity?. The Temples of Seti I and Merneptah are quite and small easy to see without any tourists in the area. 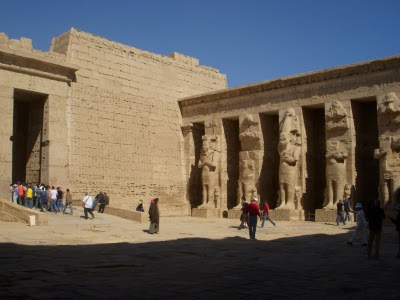 After the return of the Capital of the New Kingdom, many of the Pharaohs did not live long. Ramses the First only lived one year. It wasn’t until Seti I and II that major building of temples and tombs took place. All that Akhenaten built was the temple of Aten and the Tombs in the Amarna area. Ramses the III built a massive tomb and many structures during his time. From the time of 1352 when Amenhotep III died in the red sea, not until 1294 when Seti I started his rule did any major building of temples take place. This cements the idea that Amenhotep III was the Pharaoh who faced Moses and died in the red sea. Again, at the Temple of Seti I on the west bank, he built sex shines to the gods, which is completly different than the other Pharaohs. It wasn’t until Ramses the Great which is Ramses II, that the New Kingdom became a power-house like the time of Thuthmosis III and Amenhotep III; about one hundred years after Amenhotep III. Here on the west bank they are doing many digs; at the site of the Colossi of Memnon, Amenhotep the Third built a major funerary temple, due to the fact that it was built on the flood plain very little remains; although, they are digging in this area. They say it might have been as large as Karnak. Amenhotep the Third is regarded as one of the most splendid Pharaohs that ruled Egypt. 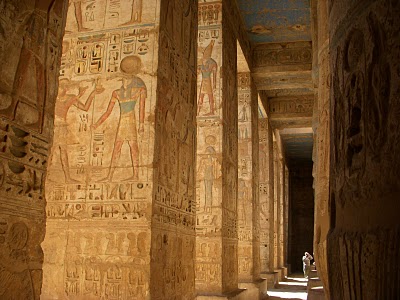 All of these pictures are of the Temple of Medinat Habu, it is the best temple on the west bank next to Hatshepsut’s Temple. I am slowly making my way to the Valley of the Kings, I am leaving the best for the last. Tomorrow I will be visting the Tombs of the Nobles, and then the Temple of Hatshepsut. Hatshepsut ruled as queen after Thuthmosis III. The son of Thuthmosis III was to young to rule at this time. 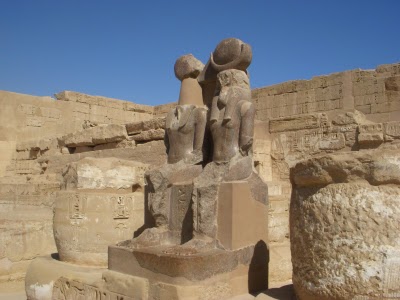 I will be touring everything on the West bank. One ticket for the Valley of the Kings only allows three tombs. Most people only view three. I will be seeing all of them. I did not come all this way to only take a tourist’s view. This is one reason why I am planning on going to Cairo again on my way north before I go to Dahab, I really should tour inside the second and smallest Pyramids at Giza. Staying with this family on the west bank is an eye-opener. Last night all the men were working and out of the house, I had dinner on the floor with all the women. The eating tray they use, which they put on a wooden crate, only about six or seven people can fit. If there is more men then the men eat first, although don’t think that the women get the crumbs, this is not the case. Most of them are over-weight because of just staying at home. Sure, they do all the house work, but they also watch a lot of TV. Kind of funny seeing them watch all these half an hour drama shows. They didn’t mind that I was there all night. I played with the kids and read my travel book planning for the next day. One thing that is clearly manifested is the victimization of the populace – it is severe. The one son, who has choosen a different life style just moved today, he has been planning this for awhile but didn’t tell anyone – everyone is devestated with sorrow. They are only moving to the East Bank, but due to strong, imbalanced attachments – sorrow and grief is an affliction like a disease. This family has the nicest house in the area, nice cement, tile floor house, which they have four houses for the family. Nevertheless, disatsifaction remains on their faces along with utter boredom and victimization.