The Valley of the Kings. 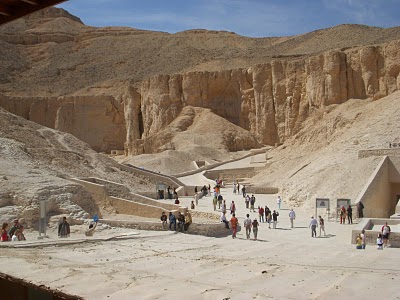 The Valley of the Kings is certainly a wonder in itself. Being the big tourist site in Luxor there was bus loads of tourists. They did allow any pictures to be taken inside and I did not want to break the rules. They seemed very strict about everything. I did tour every tomb that was open, a few of the tombs were closed. I paid extra for Ramses the Sixth and King Tut’s tomb, which was well worth the extra cost. In the Tomb of King Tut resides the mummy of King Tut. It is an amazing place, the valley of the kings. Most people only view three tombs because they are on a fast tour and they have to make it back to the big bus. I recommend a person to tour at least six tombs and don’t miss Ramses the Sixth, it is one of the best tombs. Six or Eight tombs really is not all that much, unless you find yourself totally out of shape. Here are a couple of pictures of the Colossi of Memmon which Amenhotep III erected. It is a major standing pair of statues. Within this area they are doing major digging. This is where Amenhotep the Third built a massive Funerary Temple. 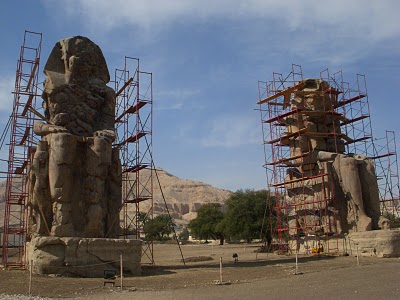 I will be shipping out of Luxor on Saturday for Edfu. The family and I made the final arrangements for the felucca trip. After tomorrow I will not be posting until I get down to Aswan. I have no idea how long I will be in Aswan, if the town is a big hassle with strange energy I might not stay very long. When I was in Cairo I bought a certified translated Quran. If your reading a Quran bought in the west it is most likely not a good translation. One thing to note: quoting from the Quran, people respect you for it, even if they are not living up to what it says. If your knowledgeable and can talk the talk – it can hard hitting and they will respect you for it. 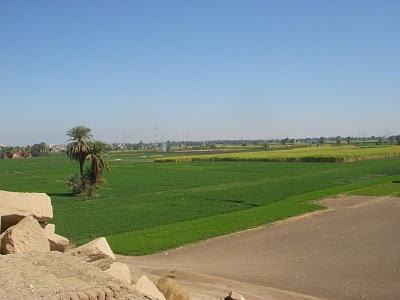 Staying with this family has been a very good educational experience proving the western thought wrong. You may hear that the Arab women are so oppressed and treated poorly? I cannot come to that conclusion; the women are very happy people. Each person has their place. The men work hard on the boats and the women raise the kids and take care of the home. They certainly have an important place within their culture. It is cultural – very traditional, and positive in many areas – and of course, along with negative aspects. There are some positive aspects that the western world will never grasp or live according to this families way of life. For valentines day, the family is buying a cake. We are all going to sit in a circle and eat cake which is an expression of the love for everyone in the family. I explained the American way for the “day of love”, they found it interesting.