The dysfunction of this family is deep into the abyss. Every little issue becomes a dramatic situation. They don’t even have the proper tools. The compost area is like a landfill with material that wont break down. The owner doesn’t even have a pair a work gloves for the helper, although I said I would buy a pair, instead she is forking out the small change. Her husband died three years ago and I think he took care of everything. Of course, her not dealing with the sorrow and grief has caused emotional congestion that prevents troubleshooting and motivation. Why a person wont sell their headache is beyond me, however, imbalanced sediments is the cause. Imbalanced sentimental attachments are extremely detrimental to the inner health of a human being. The above picture is of their organic garden here at the main house. For anybody that understands the basics of gardening, I shouldn’t have to explain what is wrong with this picture.

This picture is of a lettuce plant in the mist of the organic weed garden. This garden may reveal the peculiar situation that’s manifesting before my eyes. Even though, however, I can work at my own pace, and the accommodation is excellent considering that I have my own space. The food is getting better as the days toil onward. I am thinking, maybe the family wanted to see whether I would put up with their cold, undemonstrative hospitality mistreatment, or if I would leave. There was a man here before me, but he left after three or four days, supposedly because there was nothing to do because of the rain, although this is a good base to do some day trips.

The food is getting better; she is a good cook. 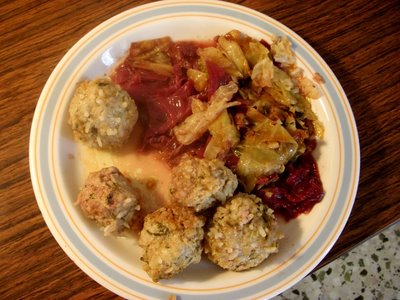 Possibly, my strategic behavior of showing patience, showing appreciation for what they do provide, even for the odd food for the first three days, and manifesting a positive demeanor despite their cold tactics that are based on fear of humankind—possibly has confused them; they do understand that I am staying for the month—we did talk about it last night.

I have experienced people’s energy of congested emotion erstwhile, but this family resides within a pickled muddy swamp. The daughter is here visiting, and a person would expect a little better energy from the younger generation, but it is the same non-communicative coldness, non-trusting, standoffish fear that results with treating the fellowman as a mere stranger, which works averse to the rules of nature.

The universal law desires each individual to have an interest in others, especially the stranger. It takes being congenial, why is this a difficult process for humanity?

The differences comparing organic farms from this one and the farm in Israel are a contrast. The Israeli family was very warm and hospitable. The family enjoyed socializing with the volunteer. I could help myself in the kitchen at anytime, and the owner was willing to go out of his way to make the volunteer comfortable. Although, on the Israeli farm the owner was very intense about the work; he would be happy if a person would work ten hours a day, six days a week. I did maneuver the situation that I was only working seven hours a day, although only two hours on that sixth day, and after three weeks I worked about six hours. I feel a six-day work week is unfair to humanity. Combining the intense work perception and paranoia of the outside world—that section of energy was an overload on the farm in Israel.

This farm is different that the hospitality and interaction of the family are cold and aloof. But, they are easy going about the work, four or five hours a day, five days a week is agreeable. On rainy days, this owner doesn’t care if no work gets done. The difference is commercially next to a private hobby. The analogous indistinguishable quality of both farms is fear of others, and of the outside world. The paranoia level is totally imbalanced. When she picked me up she asked about the farm in Israel and I commented about the level of paranoia, the continual fences, gates, and alarms—this comment must have tweaked her a tad bit, although it looks as if she recovered. The cottage and the main house are surrounded by fencing and gates, and the gates have to remain locked. Sure, if I would have a farm I would want a fence to protect the produce from animals and such types of scavengers, although this continual locking of the gates is overdramatized.

So far I have counted ten dogs that the family owns.