From the countries that I have traveled, from Egypt to Turkey, the Levant, Greece and Bulgaria, one common phrase that is predominant among different cultures is “crazy”. Several occasions while visiting a local individual would refer to someone else that they are “crazy”. I never knew the english term “crazy” is an utmost popular phrase within the different cultures of the world. This two kids hang out at the library, one day I was in my car outside talking on Skype, and, of course these two kids have noting better to do than to be in awe to someone who is talking through the computer. In someways the mentality goes back to the nineteenth century.

Here in the village the English term “crazy is used, I do not know the Bulgarian term. The reputation in the small town/village atmosphere a principle concern. Even among small town America the labeling and classifying an individual or group dominates the emotional disposition.

This village in Bulgaria is crazy in itself, they just are not aware of the disposition. The boredom and negativity that exists is at an peculiar level. Because of this the collective and individual ego strives for its secret payoff of specialness. Thus, everyone is gazing outward, critically, and with a pessimistic stance within their delusion. 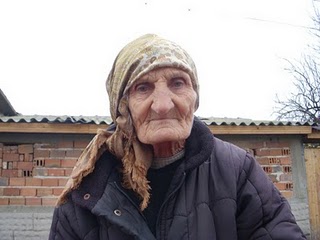 Everyone in the village will point out one lady in the neighborhood. the lady in the above picture is the crazy lady. She is seventy-nine, I thought she was ninety-five. She is a sweet lady, during the summer she would stop in for a visit if my gate was open. She would talk up a storm in Bulgarian and I would give the Bulgarian head shake defining as agreeable. This type of ridicule creates a protection of oneself exists—free expression is absent. The dire effect from the cause of suppression leads to despondency. Possibly, this is the reason that everyone says she is crazy, she is very expressive.

The prophets taught that enslavement is the result of having a concern what other people think. To turn the table on the mind-set of the villagers, a least the kids—the perception of being slightly crazy is abundant. When the subject arises of being crazy, my answer is yes, a little—isn’t everyone?

Next post: The Village Life, Part Six, The Friendliest Neighbor!