This is a common site around many small villages and especially in the mountains in Bulgaria. I captured this picture while I was sitting in my car at the library on Skype. This Gypsy lady made a couple of trips down the street hauling large bags on her back. There are some Bulgarians of the older generation that are completely hunch over at the waist. This lady could stand upright; however, from her demeanor, clothes, and overall look it is clearly noticeable that continual strenuous work and poverty are impacted upon the human psyche. The hunchback syndrome is from continual bending over in the garden. The size of gardens here in Bulgaria are much larger than in the west. The gardens are like small farms—most homes owns some cows, hens, and maybe a pig.

A subject of interest is that many people here in the village in November just started cutting and chopping their wood. I would think they would want to accomplish chopping the wood in late September or early October so it will dry properly. Also, some poor people are going around gathering wood this late in the season. To survive, hard work must be accomplished, when needed, you must gather, chop, and process the wood even if it is cold. Because of the rigorous work, most people work when they have too, I am experiencing this circumstance myself.

Many homes in the villages and towns in Bulgaria still farm as a business, though small, the company lifestyle provides food on the table. The son of my neighbor is continually busy bringing in the harvest of cabbage, lettuce, peppers, and just finished the wine making; they sell all their produce in Varna on the Black Sea where their granddaughter lives. I visited Mitko’s house, my friend in Parvomay who lived in England for three years. His parents are very nice who grows vegetables nine months of the year; the work is all done by hand using five large greenhouses plus outside fields. Currently they are harvesting leeks, and growing lettuce. 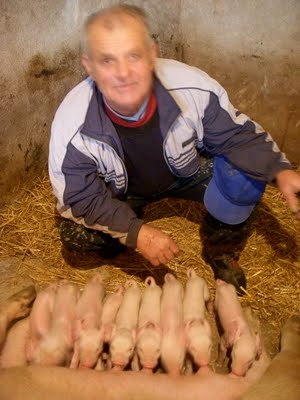 They also own some pigs and the mother pig gave birth to nine babies. They will sell most of the piglets; the mother became overweight that she cannot even stand up.

The small businesses of farming and raising pigs, hens, chickens, cows, and making Rakia, and Vino is extremely common among the villages of Bulgaria. Most older people and even some of the younger generation want the socialized system to return. As the capitalistic nature of the west forces its greed into Bulgaria, many home gardeners/farmers will struggle to keep a float.