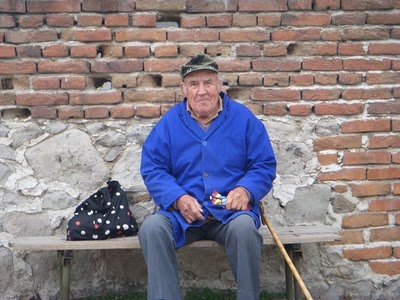 The above picture is Peter, my immediate neighbor across the street. He is one of the nicest neighbors I have experienced.

Referring to my culture there is not many exemplary neighbors that surface except for a mature gay couple that I lived next to in Aptos in the Santa Cruz area. A couple of thirty dedicated years that were the kindness most friendly neighbors.
Experiencing the cultural interactions among neighbors in different countries, I am convinced that Americans never ascertained how to properly associate with their neighbors. Of course this is not an absolute generality. Considering the circumstances it is best to not even get involved with a neighbor in America because of alienated emotional baggage.

Here in Bulgaria the neighbors within the street of the village become very familiar. The immediate neighbors across the street, and the next door, become the most familiar. Mostly, everyone else within my street is hapless individuals that stare at me with a wonder of jealousy, except for the family that had me over after butchering the cow and pig, and the family kids who live like gypsies. There are some people in the village that will continually act estranged. 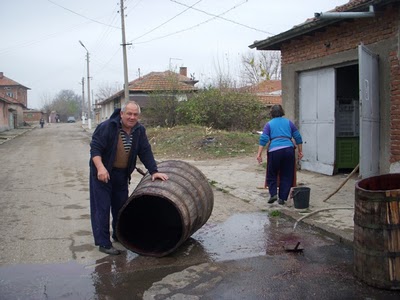 Even though the negative dwells among the positive, my neighbor across the street is one of the nicest guys. All summer he brought me tomatoes, peppers, garlic, onions, fresh produce from their garden. The above picture is his son who is finishing the homemade wine; they send it to Varna where they sell it through their daughter. They bestowed me a nice bottle of their red stock at the time of harvest. Lately, Peter is bringing over pickled cabbage, and bean soup. His wife is a wonderful cook. His grandson installed the tile in the shower room this last summer. The pickled cabbage is becoming a delight to my chemistry. The pomegranates this fall is been absorbing, and I will miss them until next fall. Throughout traveling, pickled vegetables have become palatable; in America I cannot not recall anyone that would pickle cabbage and other items in the fall, only the older generation. Cabbage is easily processed with vinegar and spices, in addition to adding some carrot maybe red peppers. The above picture is Uncle George who is related the owners of the house. He comes over and snoops around once in awhile. He is nice person who loves his rakia. He is an interesting guy; he definitely has a respectable reputation in the village.

Experiencing amiable neighbors is a positive aspect to living the village life here in Bulgaria despite the negative transmutable undercurrent that oppresses the village.