An analogous outlook upon animals and pets is slightly standardized within the former Ottoman Empire. Spending quality time in each country allows the educational process to distinguish the deeper dynamics of the cultural mind-set. After two years into traveling/nesting I have less of an interest to travel fast. 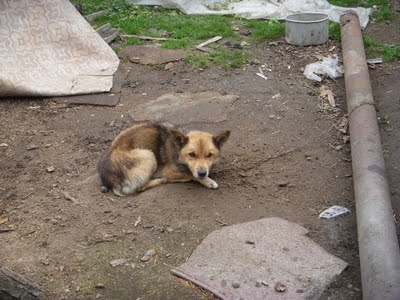 The mind-set and perception of animals are contrastingly different between the west, the middle east, and the east. The over sympathetic attachment among most westerners causes an imbalance that is a production of the ego. The example is of the organic farm I stay at in Greece for two weeks last May. Those English ladies expressed a bizarre displaced compassion upon their ten mutts, and the lonely little flower, in contrast to deprecating their fellow citizen. This mentality to animals is an ego justification that deludes the individuals reality.

The village life in Bulgaria is similar around the country concerning the mind-set to animals, but an extremely contrasting distinction from the western mentality, with the exception in the capital city of Sofia where the pet owner will bring their dogs to the park to play and run. However, everywhere that I have experienced there is a common out-look toward animals. As a western viewpoint, the Bulgarians treat their pets as tools. My English friends always commented concerning the Bulgarians and the “cruel” treatment of animals But, that is a perception that is created through the western cultural dogma of the media. I have taken time to study the nature of the Bulgarian view of pets, and according to their perception, and their lifestyle, half of the mind-set makes sense and the other half does not—the western culture is different from the former Ottoman and Eastern bloc countries. In the Villages, mostly, every Bulgarian home has a dog, and sometimes two or three. There are a few exceptions to the rule, but the majority will put the dog on a small chain, about a meter long that is anchored on the dog house. I have never viewed any villagers walking their dog. Even my two friends in Parvomay that lived in England for a time have their dogs on a chain. The reasons behind the dog chain idea are simple. First, the homes have gardens and the dog on the chain prevents havoc. Second, if the dog gets loose someone could shoot them out of fear. Now, fear is the motivating factor. Most people in the villages and mountains are afraid of dogs, because the dog on a small chain barks and acts spiteful whenever a person walks by the house. The fear, and a barking dog answers number three—the perfect watchdog. Some homes will not only have the dog on a small chain, but also, have the dog inside a wire fenced kennel. The fear that is expressed, culturally, is completely on a different level than in the west. Interestingly enough, the Russians view their animals as a pet, so this mind-set in Bulgaria is not from Russia.

Even though, there is a vast difference of perception to the treatment of animals between the west and the former Ottoman Empire, it doesn’t mean that either inclination is better. Each personal preference is different, I want the animal as a pet, not as a tool or an extra stomach.

Within these countries there are many stray cats and dogs, Egypt is at the extreme end of the spectrum with stray cats. Many western travelers question the multitudes of stray cats and dogs that are scavenging for food. Understand that these countries don’t have the money to fix the animal, in addition to creating services related to animal control. The idea to go around at night and shoot all the stray dogs in the area hasn’t surfaced among the locals within the different countries.

What about the kitty cat home-front? Occasionally during this autumn season a stray kitten would appear in the yard. I would always offer some food, but the kitten never returned. This last week I came home and my cat was joyfully playing with this small little white kitten with a black nose. I offered some food, and he enthusiastically inhaled the inexpensive processed pork sausage. My cat is crazy for this type of processed garbage; I loath the idea that it is actually for human consumption. One package is only $1.50, possibly captivating for an extremely poor family.

So, this kitten decided to stay, somehow he knew that a meal is in waiting. He has the strangest meow, and very skittish. There is a huge difference in the demeanor and mentality of a stray cat, and the cuddly house cat. I did get him in the house, and I will just pet that strange meow out of him. Right now, while I am writing this I have the kitten laying by my side, and he is purring up a storm; this is his second time in the house; I have to trick him into entering the house. One interesting aspect is that when I pick him up in the house he never attempts to scratch. His name will be O-La. So a two in one name for both cats, Mitts & O-La, for short Mitts-Ola. 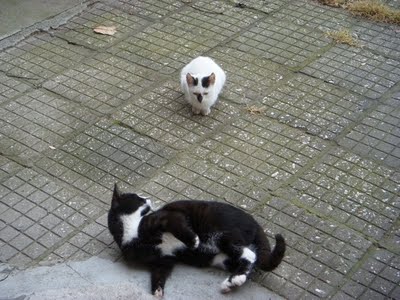 I went to Hisar (the house of the family) this last weekend, Zivko the bother of Boris will be in Bansko for the winter doing seasonal work teaching snow boarding and skiing. I do have the opportunity to stay at the apartment in Hisar, but I am not really interested. I dislike like apartments, it is too modern, and I dislike electric heat. I certainly find my ultra traditional situation and routine extremely pleasant. I did bring Mitts to Hisar which is a one hour drive, he did great in the car and enjoyed it once he got use to the atmosphere of moving. He is a really good cat and adapted to the apartment atmosphere, yet, he enjoys the outdoors where there are chances at catching mice. We left for two nights and I knew little O-La would stick around, and he did, he came running out of the barn immediately when we came through the gate.

Previous post: Steve is Lost, The End, sort of.