Tombs of the Nobles. 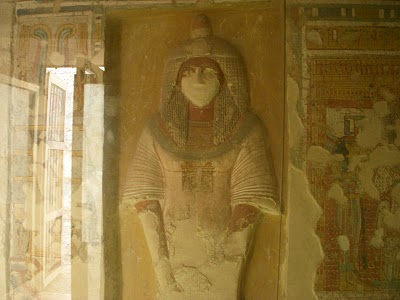 Great news! Last night we all watched the football game of the finals of the African cup. Egypt won 1-0, they are #1 in Africa for football. I could just see everyone up in Cairo. Cairo is most likely going nuts. The family and I are getting more relaxed toward each other. The ladies are very warm and helpful with whatever I might need. The Father of the house is old, using a walker to get around. He broke his hip awhile back. The mother of the fathers wife is still alive. A very old lady, but still walking. The father and mother have four sons which are all married. In this area the daughter that gets married moves with the in-laws unless the family doesn’t have any boys. One son did move yesterday, although the three sons live at home with their wifes. The oldest son has three kids. The perception of the west is mostly that the males dominate the women. In some ways yes, in many other ways – not at all. The women run the house-hold, take care of the kids. They all wear gold and are nicely dressed. They really don’t seem to mind staying at home and not having to work in the workplace. For a person to really understand the depths of a culture, that person has to live around it. There are certinly negative aspects, but there are also positives that the western world will never grasp. 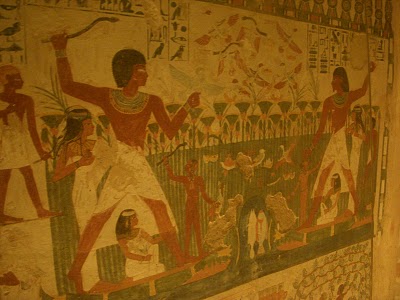 Today I toured the Tombs of the Nobles. Within the Tomb of Ramose (which was a governer for both Amenhotep III and Akhenaten) the arab guard brought me all the way down to the inner tomb. There was a big group so we need to hide our escape of the main Tomb area. I felt I was Indiana Jones for awhile. I could not believe it, we climbed way down with flashlights, all the waydown into the inner-room and saw the where the mummy sat. This area was several meters down. We quitely, hidding from everyone, entered the main room after climbing back up. I gave him a big baksheesh. It was a treat, the benifits of going solo – traveling alone. 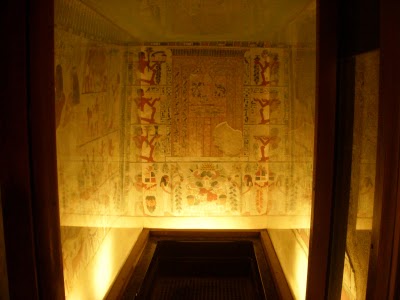 Many people within this area invite you for tea and what-not. There was this lady who spoke good English who invited me in near a Tomb of a Noble. I had tea and relaxed on the couch because I was very tired. She offered to cook me lunch and I accepted. Grilled fish, slightly fried potatoes, cooked eggs, and cheese. I paid her well, it was a very good lunch. One thing that is evident in the world, everyone wants money. The question I have been asking people is upon the idea that people want more and more. If they have a lot, people just want more. If they have little, then their want is for what they need, although, even when they get something, they want more. I know filthy rich people that are miserble in life. Nobody is satisfied, people run away from their loneliness, boredom and their inner-self. 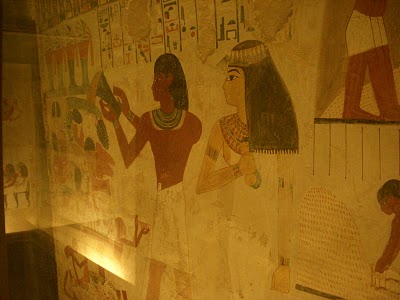 There is only one answer to happiness. It resides within and how we give to a person who deserves it. Having a close relationship with the Divine by living the commandments. The population in this world cannot find happiness within this world. It will never-ever be found, only indiviuals can progress to this point of deep inner happiness. Heck, I tell people I lived in my truck for year; confusion arises, nevertheless, I was perfectly fine in life and don’t mind being “homeless”. It doesn’t matter where I live or sleep or what I have. Happiness resides without having a single thing of this material world, without any attachments, such as family, and even to the results of our own actions, and a person’s religion. The unhappiness of the populuce is clearly manifested.

Tomorrow will be the tour of the Temple of Hatshepsut. By the way – a correction: Queen Hatshepsut was the daughter of Tuthmosis I and was married to her half brother Tuthmosis II. Tuthmosis III (the great conquer of Egypt) was two young when Tuthmosis II died. Hatshepsut cowned herself Pharaoh and ruled a Queen and built herself a Temple.