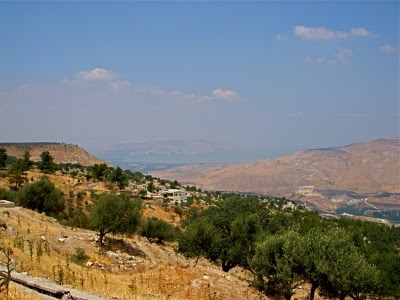 Umm Qais rests in the northwest corner of Jordan, a area with spectacular views of The Sea of Galilee and the Golan Heights. The site of Umm Qais is the site of a Roman City and an Ottoman-era village. It’s said, that in this area is where Jesus healed the two men that were lepers and demonized. The demons were allowed to enter into a herd of swine, which was driven off of the cliff. 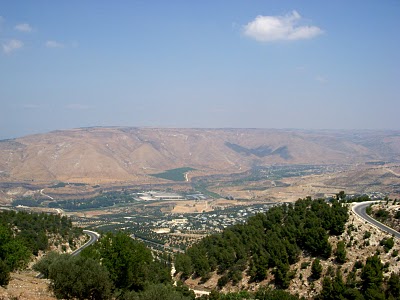 An Update: I will be heading to Syria on Monday, if there is no problem crossing the border; I have a couch-surfing situation set up for a few days. The American women living Beirut has asked if I would have an interest in house-sitting her cat in when she leaves for America this summer. There is a very good chance I will try to arrange this to happen, I could always get my visa extended. I really don’t want to get to western Turkey until November. I do have an interest in spending some quality time in Lebanon to learn about the complicated country that the media has always projected into the public eye. 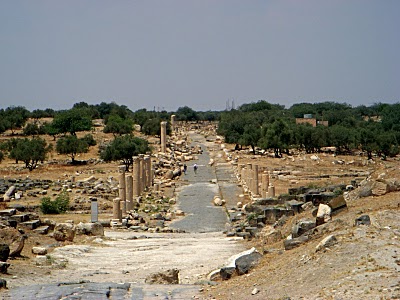 I have been meeting many people here in Irbid, and having some good conversations at this coffee shop, I have been hanging out at lately. The subject of their dislike of the lack of freedom in Jordan has been apparent. The same complaints as in Egypt have been the discussion, bad economics, and not enough freedom. The problem remains, the culture is more concerned about personal and family honor, which inhibits freedom. In addition, the subject of boredom and loneliness continues to be at the forefront. The culture, again, inhibits normal activity such as dance, because of the separation of the sexes. Here in Irbid there are not any enjoyable classes a person can go and interact with the opposite sex. Many people hang out at the coffee shops and smoke. The same routine day in and day out people is bored with, nothing changes people say.

Passive activity slows the mind down to a lazy predicament, unable to troubleshoot, some people are engulfed with lethargy, a dullness that blocks the mind from being able to discover activities that are satisfying. Television is a major culprit of passive activity, along with video games. Divine wisdom has created boredom and loneliness as a motivation tactic, to help stimulate a person’s interest in the search for the purpose in life. As an outlet, many people smoke the water pipe at coffee shops. In the western world, many people succumb to alcohol and drugs. There is of course drugs and alcohol in Jordan, just at a lesser extent and behind closed doors. It is fascinating observing a world that has circumstances that are more material, compare to the time before electricity, and the dissatisfaction that exists among humans. 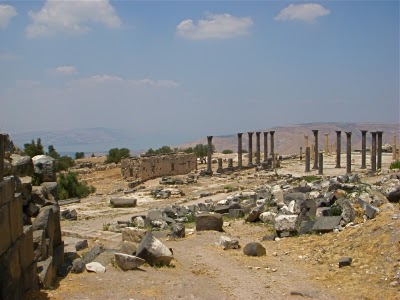 It has been kind of a rocky month of May in the world this year. Major disasters in Burma and China have taken place, with tens of thousands of people dying. The timing of the China earthquake is ironic, just before the Olympics, which draws more world attention. Just when travel season starts, in Lebanon fighting breaks out, even though calm has returned. Sixth anniversary for the creation of Israel, the first time the Jews enjoyed their own nation since the destruction of Solomon’s Temple in 586 BCE. The next ten years of Israel’s exile (no temple) will be interesting to observe. Food and fuel prices are sharply increasing. What is happening – many people may be wondering? Continual problems must take place, and this world is destined to get worse in preparation for the Man of Lawlessness. The Apostle Paul clearly taught what will happen in the world once the time of the Man of Lawlessness (the anointed one of the children of darkness) draws near. This world must look like it needs a savior to serve as a form of deception. The deception serves as an obstacle for the wicked ones of the darkness. 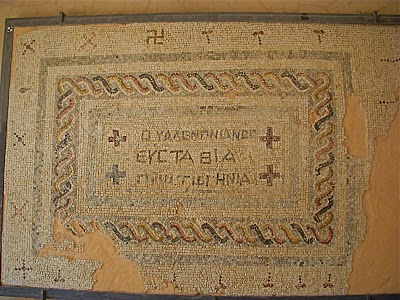 Notice the Nazi Swastika on this 4th century Mosaic.

Don’t let fear or hopelessness overtake your emotional reality – believing there is no way out. This world has its destiny – its destiny is for the Children of the Darkness, not for the Children of the Light. The people that are dying now is due to their karma. They are destined to be reborn in this late time before the arrival of the Man of Lawlessness. For the families that are devastated, they are supposed to suffer through their experience of grief and sorrow. Indeed, there are parts of the world that have worse karma then others. The world must look like there is no way out, and will experience even stronger, more powerful disasters, before the Man of Lawlessness arrives. The deception will be that he is the savior, and will try to deceive people that he is the good guy. If a person in interested in cultivating good karma – choose your words wisely.