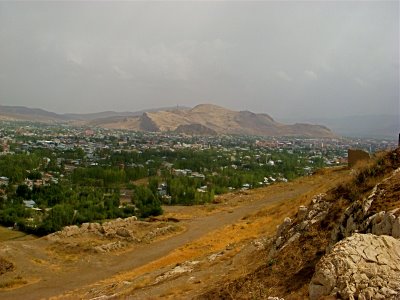 Van was the ancient Urartian capital of Tuspa. It is situated in a green, fertile oasis in the midst of the mountains. The Urartus, Armenians, Kurds, Arabians, Romans, Seljuks, Ottomans, and Byzantines all grazed on this beautiful fertile land. The impressive citadel stands the high peak above the shore of Van Lake and dates from the 9th century BC. 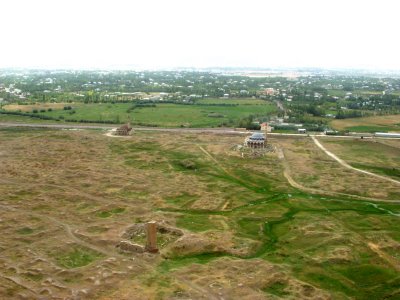 Van is also famous for its Van cat, a pure white, longhair cat that has the strange feature of one blue eye and the other green. There is a statue of the Van cat upon arriving into town. There is a side of Van that is modern, although Van is a very conservative town, 70% of the population is Kurdish. There are a small percentage of couples holding hands on the main street of town, although the majority that is out on the streets are men.

Every evening during Ramadan is similar, around 6 pm everything closes, except the restaurants. Mostly men, some families, but very few, gather at the restaurants. After the prayer call they eat, smoke, drink tea and leave. Each night I have timed this process, it takes 20 minutes. If you find yourself late for dinner, many restaurants may be closed or they are empty. Little does this culture understand that there isn’t any connection concerning fasting and Divine Favor, although fasting can be beneficial concerning health. Since the culture is embedded in slavery concerning honor verses shame, and the populace engages in gossiping, mocking, ridiculing, and a abusive tongue that causes a bad reputation for their fellow citizen—fasting is in vain and meaningless. The Israelites fasted and sacrificed, thinking that their selfishness and greed would be forgiven—they were significantly incorrect.

From having conversations with several men from Egypt to Turkey, many men have expressed their insecurity concerning the pain of agony resulting from possible heartache. Because of their immature weak heart, the result once they’re married is to keep there wife covered, and keep them in the home around family; the lack of trust concerning women in the Islamic culture that is manifested is astonishing. Little do these insecure weak-hearted men know that generally women are more loyal than men. In the western world, discernment is crucial determining a “game player” next to the honest hearted person. Nevertheless, jumping into a relationship, without a foundation of friendship first, is taking a chance of potential heartache. In the big cities in the Islamic world, these demands of the husband do not always take place.

From close observation, the prime factor beneath the surface of individuals abhorring a religion is the presumptuous egocentric judgmental attitude of the participant of religion. Dwelling at a low level of consciousness, the deluded religious person is sincere in their endeavors to gain a relationship with the Divine spirit of the light, though, their ego and religion of Idolatry have created a roadblock that the participant cannot recognize. A judgmental attitude predominates, and compassionate love is rooted out of the heart—the ego acts out the play on the stage. Even though, for many of the children of the light, religion is their path. Interesting enough, I have met many travelers that claim to be atheists, or people express their disgust concerning religion because of the dark behavior that religion historically displays. Cultures that are based on religion that program an ideology that cannot be deprogrammed, and the culture publicly enmeshes the populace with religious dogma; religious leaders that molest children because idolatry that allows the darkness to engulf them; the murderous rampages through war from people that claim a religion and claim to know “God”—these situations have disgusted some westerns to the point of disbelief, although moral standards still dominate within a person’s life.

From close observation, people that have abandoned religion, simultaneously create spirituality within, and live morally, accordingly to the commandments that Moses wrote down—though the person is unaware—this type of person will experience the love of the Divine Spirit on a momentous scale than a person who bows down and prays to stone, wood, metal, or an organization through a religion that the lower entities attach on to and thrive. Nevertheless, each person of all cultures face the same destiny—rebirth with karmic bonds attached—however, each person will face the Judgment era that will cause each person to choose between the light and darkness, nobody will escape this age of time because of the rebirth cycle. Indeed, for the fearless person filled with spiritual faith, the time of judgment is a positive epoch. For the fearful, faithless person filled with dread, the time of judgment will overwhelm the mind and heart with anxiety and cause a terrifying expectation.

A person’s inner fear is an indication that the subject is affirmative.