A few pictures from the Roman Theater. 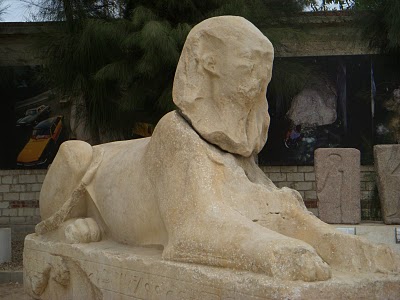 The dark stone in the back is the Roman baths.

Today I went to two tourist sites. The Catacombs which they did not let any Cameras in the underground tomb, and the Roman theater. Both sites were interesting.

The Catacombs in Alex were amazing. The way they found it? a donkey fell through road, and there it was. This major under ground tomb, originally it was just for a royal family, although the was a famine and they stored about 6000 bodies in this tomb. It was above ground 2000 years ago, but now you have to walk 96 steps down into the catacomb.

So guess where are the tourists are? on tours. I have been wondering, how is it that this country can get 2.5 million tourist a year and I don’t see anyone on the streets or in the local areas. Now I know, they take tours and stay on tours. They say at the big hotels and eat at all the spendy restaurants and spend big money, sometimes euros and dollars on boring tours. Most look very ragged and tired, which is OK, but the part that is missed is the culture, the people, the dynamics of the country.

One reason they stay on tours is because of the way the culture is out here, because of people being poor, haggling foreigners is just the way it is, it is one negative aspect that is important to understand the depths of why they haggle tourists. I am learning how to bargain very quickly. I got my hair cut last night. I walked into the store and said the greetings and asked how much, the store owner, who works 10 hours a day six days a week, said no problem. I said again, how much? he said – no problem. I said, yes I know no problem, so how much, and he said no problem. OK, I knew he did not want to give me a price until we were done, which he trims your eye browns, ear hairs, and nose hairs along with the cut. We got done and I forgot I have a fifty pound note in my money clip, oops, big mistake. When they see the big bills they kind of would rather have you give them one. I knew I was getting suckered, which was OK. After, he gave me tea and we sat and chatted for a good hour. I showed him all my pictures in my Camera and he shared that he has three daughters. He was a nice guy and I did get a great hair cut. Although, now I know the going rate. I will offer 5 pounds more than the local rate.

In a taxi if they say “no problem” I tell him to let me out, then they will agree to a price. Today I rode with a normal taxi diver, the problem was that he had no idea where he was going. Big time language barrier, although since we went the wrong way I compensated him for it and he was thankful, it seems like the more of a crazy driver, the better, the one who honks five times every block and comes two inches from running people over.

I had a great breakfast today, I had “foul”, which is pronounced “fool” with eggs on top, with felefa and bread and hummus, delightful. Foul is great, nice hearty beans which you dip the pita bread in. I am heading there tomorrow before I head to the bus station.

Heading to Marsa Matruh for a few days and then Siwa.